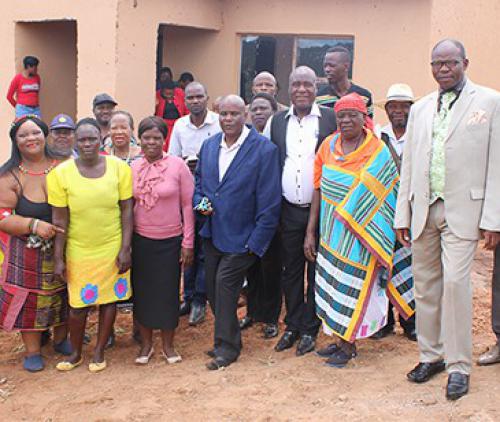 Two houses for the needy, 80 school uniforms to pupils

Joy, happiness and elation were in the air when their ward councillor and other stakeholders handed two identical three-roomed houses to two families.

This came after the councillor for Makhado Municipality’s Ward 38, Ms Jerminah Rashamuse, had been deeply disturbed by the heart-breaking living conditions of two families. She was so touched that she decided to canvas for funds to secure building materials to provide shelter for them.

The beneficiaries are Mr Pfano Ramuntshi of Makungwi village, and Ms Rendani Matula from Raliphaswa village. “Even though I had submitted the families’ names to the housing list in the relevant department, so that the government could provide RDP houses for these families, I also realised it might take a very long time before houses could be provided for them since many needy people were before them on the list,” she said.

Rashamuse had sought donations from fortunate people in the form of building material, so that the houses could get built. She said that, although it had taken almost two years, she was happy that the houses had finally been completed and handed to the beneficiaries.

Mr Pfano Ramuntshi's sister, Ms Coni Ndou, said that she appreciated the councillor’s and donors’ efforts and generosity in ensuring that her brother finally had a shelter over his head. Ramuntshi is currently searching for employment in Gauteng. “We are happy for the house, and we thank our councillor and all people who contributed towards realising this great dream,” she said.