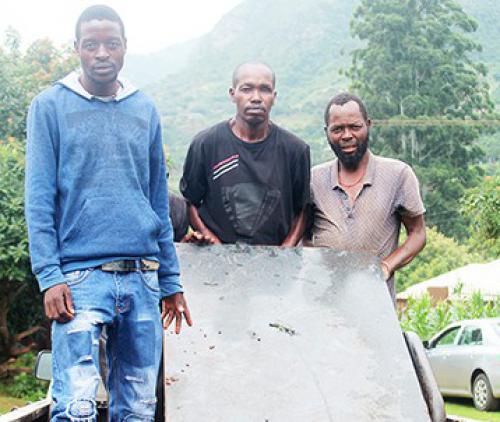 Community members photographed with stolen tombstone slab at the vehicle.

The community of Maelula was shocked to discover that tombstones had been stolen from graves at a graveyard last Friday.

Some tombstones were missing, and other tombstones were broken. The baffling discovery was made by members of the community who came to the graveyard last Friday morning to prepare a grave for one their relatives who had passed on.

Mr William Makhavhu, whose father’s tombstone had been removed, said they had spent a lot of money to construct the tombstone, “because we want our beloved deceased to rest in peace. I want the police to bring the all culprits to book, because many villagers used their last money for the tombstones".

Makhavhu said when he went to inquire what was going on, he was told by a member of the community that they had seen a man in a vehicle with a tombstone. The community members called the chief, who instructed them to stop the vehicle and question the man.

Vhamusanda Vho-Muonyolosi Budeli said that this was not the first incident of its kind in the area and the community was working together with the different structures to make sure that it did not happen again. He said that people who were doing “these barbaric deeds came from the community,” and appealed to villagers to report any crime or wrongdoing to the police.

According to him, thugs have lately been targeting the most expensive tombstones in the graveyard. He said that the alleged suspect was the owner of a well-known funeral-service company. The suspicion is that the stolen tombstone would be polished and erected on another grave.

Members of the community, together with the family members, opened a case of theft at the Makhado SAPS.

The spokesperson for the SAPS said that a case of malicious damage to property had been opened. He appealed to the community to assist the police with the investigation. He said the police would do everything in their power to make sure crime ceased to exist in the community.

The suspect, Tshimangadzo Khodobo (36), appeared in the Louis Trichardt Magistrate’s Court on Monday and the case was postponed. He was released on bail.