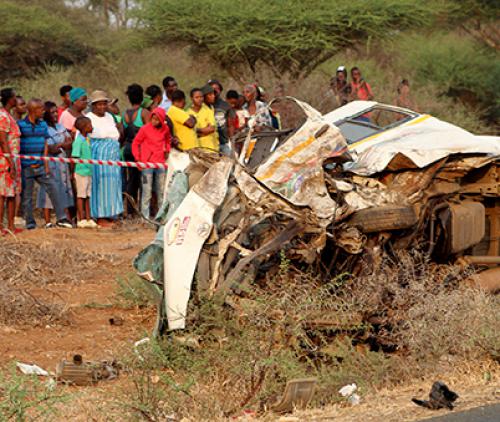 The taxi overturned after the head-on collission.

A horrific accident on the road leading past Tshiozwi in the Sinthumule/Kutama area claimed the lives of four people on Saturday morning.

The accident happened on a bend in the road that is notorious for causing tragic accidents. From what could be established, the four people were travelling in the direction of Madombidzha when the vehicle collided head-on with a minibus taxi.

An eyewitness, Thomas Musekene, said that he heard a loud banging sound before the accident happened. “I was standing next to the road when I suddenly heard that sound. I realised that the car could overturn, as it was travelling at high speed,” he said. The accident occurred at about 05:15.

The emergency services were on the scene shortly afterwards but had to use the “jaws of life” to retrieve the bodies. The driver of the taxi was taken to the Louis Trichardt Memorial Hospital for treatment.

A family representative of one of the deceased, Ms Tiny Kutama Sidimela, said that the family were coping with the loss, even though it was a difficult time for them. “We understand and accept that our beloved children are gone, and it will be very difficult for us to live without them. It is also important to acknowledge the community´s support since we were greeted with the bad news. God has done his will,” she said.

Another family representative, Mr Thabang Mudau, thanked the community for all the support they had received. His words were echoed by a spokesperson for the Machaba family, Ms Takalani Munyai. She said that any assistance from the side of the community to the affected families would be most welcome and greatly appreciated.

The Makhado mayor, Cllr Samuel Munyai, expressed his condolences to the families and said that their loved ones would be always be remembered. “Understandably, it is very difficult to continue with everyday life after such a traumatic experience and the families need support,” he said. Munyai urged members of the bereaved families and all stakeholders involved in the preparations for the funerals to be united and work together with their municipalities to ensure they received a dignified funeral.

Thovhele Vele Kutama expressed his condolences to the families of the victims and said they would be sorely missed. He added that the community members around the Vhembe area were deeply touched by the horror of the accident, especially as the victims were still so young. “The family members of the victims need our support in hard times like these, and we hope accidents of this nature, which can be prevented, will never again take place on our roads,” he said.

Those who want to assist any of the families can contact Vhamusanda Vho Manavhela at 0720294508.