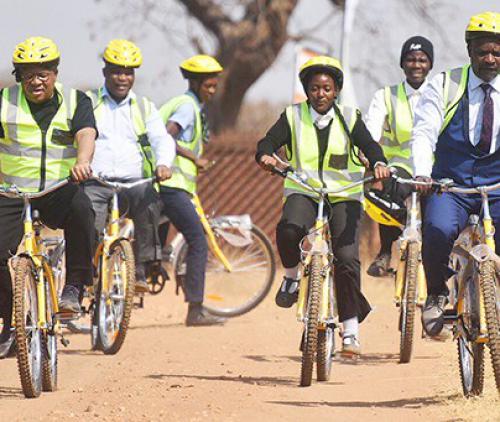 The gift of more than 450 bicycles to pupils of 10 schools in the rural Vuwani area has come as a great relief to the learners, who ran the risk of being raped in bushes when going to and coming from school daily.

On Friday, the Minister of Transport, Mr Fikile Mbalula, presented 452 bicycles to the learners. The handover took place at the Lwenzhe Technical School at Tshino.

Before the formal event, Mbalula first visited schools in the Tshimbupfe area. He said that the bicycles were part of the department's Shova Kalula programme, aimed at supporting disadvantaged learners who walk more than three kilometres to their different schools.

He said he was very touched when he learnt of three learners who were sexually molested and violated on their way back from one of the schools in the Vuwani area. He said the programme had been launched many years ago to assist learners who were not covered by scholar transport. "We are intervening as government; we are attending to people's challenges. This is a boost and support to you, and we expect a better person from you. Do not disappoint us, but be what you want to be in life," Mbalula said.

He further urged learners to take care of the bicycles, so that when they finished school, these could be used by their brothers and sisters.

Mbalula added that learners should focus on their studies with the hope that they would get jobs as the government was busy creating jobs.

The director of the Vhembe District Department of Education, Dr Gerson Rambiyana, thanked Mbalula and MEC Masemola for the valuable gift. “After the nasty and shocking incident on learners in the area, learners felt not safe. This support has come at the right time.”

On behalf of the local traditional leaders, Chief Livhuwani Matsila commended the minister for the support he was giving to the disadvantaged learners. "We view this as a milestone towards achieving that all learners have transport to schools. This will go a long way towards ensuring the safety of our children," he said.

Minister Fikile Mbalula (centre) is congratulated by Vhembe District's education director, Dr Gerson Rambiyana. This was during a ceremony where the minister handed more than 450 bicycles to learners.