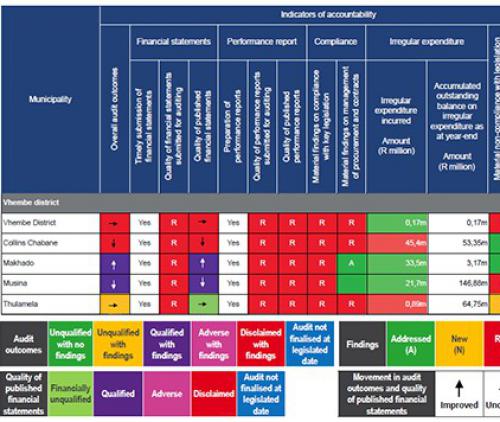 A part of the AG's findings, highlighting the problems in the Vhembe District.

The problems at municipalities are continuing and, to make matters worse, no culture seems to exist where individuals are being held responsible for transgressing laws. Municipalities are also using consultants at a huge cost to taxpayers to try and get their books in order retrospectively, instead of implementing regular controls.

These were some of the findings of the Auditor-General (AG), Kimi Makwetu, in his consolidated general report on the local government audit outcomes. The report was released last week and paints a rather sorry picture of the state of municipalities in most parts of the country.

The Vhembe District’s municipalities did not impress the AG. Two of the five municipalities showed a regression compared to previous years, with only one, Makhado, showing slight improvements. It also transpires that the illegal investments that the Vhembe, Collins Chabane and Makhado municipalities had made at VBS Mutual Bank are seriously affecting service delivery.

The AG was very critical about the role of leadership in the municipalities and their reluctance to address deficiencies in the internal control mechanisms. He pointed out that municipalities are not adhering to legislation, not preventing unauthorised expenditure and are not complying with supply-chain-management prescripts. “It is evident that the deteriorating accountability for financial and performance management is not being addressed, as there are no consequences for those who fail to comply with legislation,” he said.

The problems can also be blamed on the oversight mechanisms, such as the municipal public accounts committees, that are not doing their jobs. “It is also vital that members of these committees have sufficient knowledge of legislation to interact meaningfully on matters of compliance and thus adopt effective resolutions,” Makwetu said.

The irregular expenditure incurred by municipalities in the province in the previous financial year dropped to R1 063 million, but this figure is expected to rise when the figures of all the municipalities are taken into account. Two municipalities, Thabazimbi and Modimolle-Mookgophong, did not have audit outcomes available and were excluded from the report.

The AG highlighted the problem of municipalities’ using external consultants to try and improve their audit outcomes. The Vhembe District Municipality spent R19 million on consultants while the Collins Chabane Municipality forked out R13 million for external help. “The cumulative amount spent on consultants by Polokwane, Elias Motsoaledi, Mopani District, Vhembe District and Collins Chabane over the past two years amounted to R159 million; yet skills were not transferred adequately, as management continued to appoint consultants for the preparation of the financial statements,” the AG said.

The appointment of expensive external companies seemingly did not help in producing clean audits. “Notwithstanding the investment made through the appointment of consultants, the financial statements still contained material misstatements that were identified during the audit,” the AG said. He attributed much of this to the fact that consultants were provided with insufficient supporting documents, making it impossible for them to prepare credible financial statements.

In the report on the Vhembe District’s municipalities, poor leadership is very clearly the root cause of the problems. The five municipalities were criticised for the instability or vacancies in key positions. Key officials were also lacking the necessary competencies. A root cause of the problem was identified as “the inadequate consequences for poor performance and transgressions”.

The lack of proper accounting systems reflects in the periods that the municipalities take to pay creditors. Musina Municipality seems to be one of the worst, taking on average 494 days to pay their accounts. Makhado takes on average 101 days, while Thulamela settles bills in 59 days. The payment periods for Vhembe District and Collins Chabane were not available, as these could not be audited.

The two best municipalities in Vhembe seem to be Thulamela and Makhado. Seemingly, these two municipalities co-operated well with the AG’s office, whereas at the other three, problems of protests, threats, intimidation and contestation were encountered. The AG complained last week that several of his staff members were threatened and intimidated when doing audits. He did not mention whether this happened in the Vhembe District.

The illegal investments that two of the Vhembe municipalities made with the VBS Mutual Bank are starting to take their toll. The Vhembe District Municipality and Collins Chabane Municipality formed part of the eight Limpopo municipalities that invested R1 191 million altogether in the mutual bank. “The funds invested in VBS Mutual Bank were a combination of conditional grants, equitable share and own revenue,” the AG said. He reckoned that recovering the money was highly unlikely.

“Collins Chabane failed to impair the balance as required by the applicable standards, and Vhembe District did not disclose the entire balance invested with the bank,” he said.

The Vhembe District Municipality is responsible for water provision in the region, but because of these losses is unable to perform repairs and maintenance of water pipes and boreholes. Previous reports indicated that Vhembe had invested R800 million with VBS, but when the bank went bust, R311 million of those funds was still with VBS. Collins Chabane municipality is believed to have lost R120 million in the VBS scam.

The VBS investments and the subsequent effect these had on debt collection left a scar and contributed to the provincial figures. “The province incurred unauthorised expenditure amounting to R2 832 million – a huge increase from the R1 393 million in the previous year,” the AG said.

The AG advised municipalities to decrease their spending and improve their debt-collection strategies. He also highlighted the fact that the municipalities owe significant amounts to Eskom and the water board. In Limpopo, the water board is owed R1 201 million, of which R715 million is older than 120 days. Eskom needs to be paid R366 million, but of this amount R206 million is debt between 0 and 30 days.

Citing an example of how the lack of accountability affected service delivery negatively, the AG mentioned the Nandoni pipeline project. The project to construct a bulk pipeline from Nandoni to Muraga via the Mangondi project was started in 2016 but is still not complete. The Vhembe District Municipality has spent R81 million on the project to date, with a total contract value of R160 million. The AG said the fact that the project was unfinished was because of “ineffective monitoring, management and supervision”.

The AG encouraged the leadership in the province to ensure that a culture of accountability was cultivated and that all levels of management and leadership accepted responsibility for improving audit outcomes.

“The tone has to be set at the top (by senior managers, municipal managers and mayors) that there is zero tolerance for poor performance and transgressions,” Makwetu said.