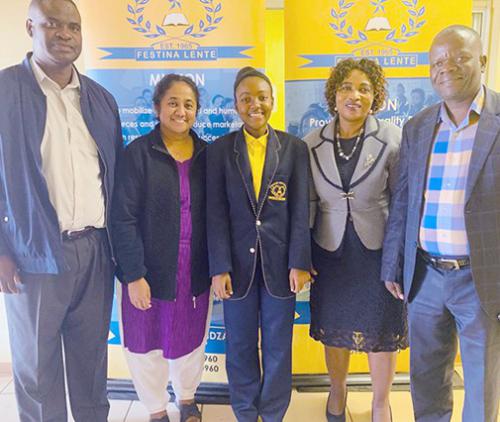 Thengwe learner to represent province at conference in Canada

The multi-award winning school, Thengwe Secondary, is continuing to make headlines after it was announced that one of its learners, Uzwothe Mukwevho, will be representing Limpopo during the Women Deliver Conference to be held in Vancouver, Canada.

Mukwevho, a matric learner at Thengwe, hails from the rural village of Makonde. She is leaving tomorrow (Saturday) for the global conference that is scheduled for 3 to 6 June. The conference takes place every four years as a globally recognized conference on gender equality.

In an interview with Limpopo Mirror at her school during the week, Mukwevho, the daughter of Mr Ntshengedzeni and Mrs Tshinanne Mukwevho, said she was ready to be part of the discussion that would involve more than 7 000 delegates of world leaders, advocates, academics, activists and journalists. They will discuss ways to accelerate progress for women’s rights and equal participation everywhere.

Mukwevho’s trip and those of four other learners from within South Africa are sponsored by the Motsepe Foundation’s Women’s unit, led by Dr Precious Moloi-Motsepe.

Mukwevho said that she was grateful to be chosen as one of the five learners to participate in the conference. “I never thought one day I will board a plane for free just because of my academic excellence. Many thanks to my principal, Ms Mercy Madanda, teachers and my parents. I am happy to be at Thengwe, which is giving me so much exposure and opportunities,” said Mukwevho, who wants to study oncology at University of Cape Town when she passes her matric next year.

Her principal, Madanda, ascribed their continued success to the foundation laid by the former principal, Mr Nkhangweleni Nemudzivhadi. “Our former principal taught us the culture of hard word, excellence, dedication and teamwork. He used to advise us to motivate learners by exposing them to other challenges like competition from outside school,” said Madanda.