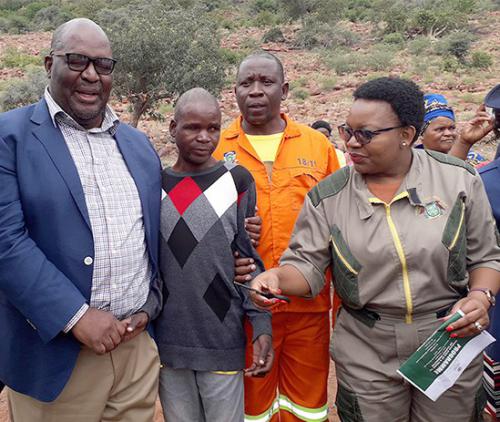 Mr Samson Makhuthe (39) had been living in a dilapidated one-room house for most of his life without any hope that he would get a decent house one day.

The visually impaired man, who relies exclusively on his disability grant, is looked after by his nephew. This means that a family of four only relies on his grant as the main income for the household.

His struggle, however, is gradually fading since he moved to a newly built house that is a product of the National Home Builders Registration Council (NHBRC)’s innovative building technology (IBT). The house is part of the institution’s mandate to promote and raise awareness about IBTs in South Africa.

Makhuthe could not contain his excitement last Thursday when the MEC for Co-operative Governance, Human Settlements and Traditional Affairs, Mr Jerry Ndou, and Vhembe District Mayor Mavhungu Luruli-Ramakhanya officially handed over the house to his family.

“We could not afford a decent house,” he said. According to him, the grace of God made the government think of him. “It feels way much better, and I will always be thankful to God and our leaders who thought of me and my family to provide a helping hand,” he said.

Mr Ndou thanked all the people who had supported them while building the house. “The house was not built with bricks. We are using new technology and the NHBRC is introducing it to the people. This technology is not expensive and will do wonders for us,” he said.

He said the house was easier to maintain and would allow the family to live there without maintaining it for the next 20 years.

Another beneficiary, a single mother from Mtititi village, Ms Nthabiseng Mashula (39), also moved into her new house on the same day.

Luruli-Ramakhanya, the MEC and other government officials also opened newly built toilets on the same day in Tshikuwi.