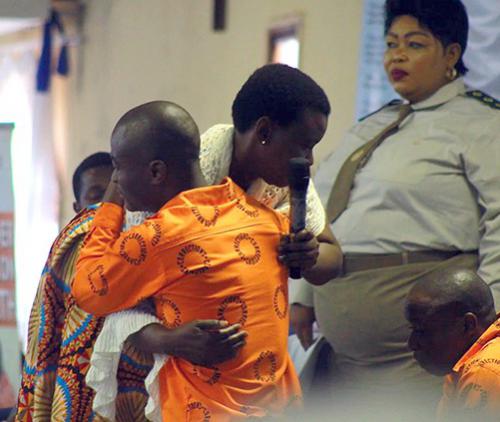 After making peace, offenders and victims hug each other.

Forgiving someone who has wronged you might not change the past, but it will definitely change the future.

The Department of Correctional Services in Thohoyandou recently hosted yet another emotional victim-meets-offender dialogue, also known as the Victim Offender Dialogue (VOD).

Offenders who committed crimes such as rape, murder, arson, robbery and housebreaking had the chance stand on a podium and look those they had wronged in the eye and apologize.

One emotional case was when a father was narrating a story of how he had countlessly raped his stepdaughter.

“I was at home alone and my wife was at work when she (the stepdaughter) came back from school. I instructed her to go and change her school uniform and eat,” he narrated. “She later came back and said she was done. That was when I asked her to lock the door and take off all her clothes, and then I asked her to lie on the bed. That was when I started raping my stepdaughter,” he said.

He said the issue was later resolved by the family, but he was arrested and stood trial. He was sentenced to four-and-a-half years in prison. He is currently serving a three-year parole sentence, staying in the same house with his stepdaughter and his family. They have forgiven him.

Foli Sithole is serving a 15-year sentence after he killed his father with an axe.

He said it all started back in 2001, when he was arrested for rape and was sentenced to spend 12 years in prison.

“When I got arrested, my mother was sick, and I used to call her all the time. She once told me that if she died, I must know that my father didn’t do things properly,” he said. “One day my aunt and uncle came to visit me and told me that my mother had passed away.”

Sithole was then released from prison in 2007.

“When I was at home, my father came complaining and he said things that broke my soul. I remembered what my mother had told me when I was in prison,” he said. “I then took a decision to kill him, so that I could have peace. That was when I took up an axe. I didn’t say anything or think twice; I just started chopping him. I then ran to my uncle’s house and I told him that I had killed his brother-in-law.”

His sister, Sophie Sithole, said that the family had forgiven him and they wanted him to come and stay at home.

This has to be one of the most inspiring stories on forgiveness.

Ms Susan Mpfuni did not only forgive her offender, but she also employed him and trusted him with running her car wash and doing all the hard-labour chores at her house.

Her offender is Agrey Mugari, and he was arrested for housebreaking. Agrey said that he had gone to the Mpfuni house to look for a laptop that he had been sent to steal by a famous musician.