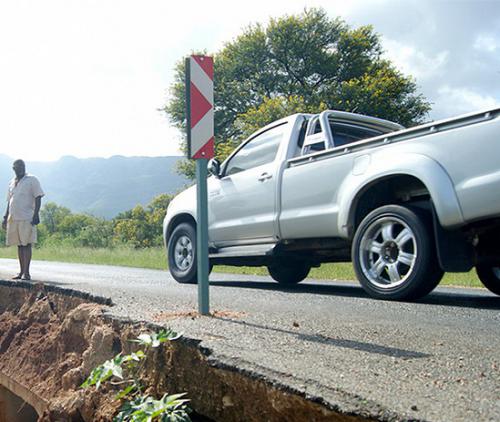 The collapsed bridge on R522 was a 'death-trap'.

The Kutama Traditional Authority (KTA) and residents in the area expressed their relief and joy when they noticed that the 'death-trap' bridge on the R522 road from Tshikwarani to Louis Trichardt had been finally fixed.

The bridge was damaged by the heavy rains some seven years ago and the fixing project, which was more of a reconstruction of a new bridge, started on 15 March last year. The project duration was estimated to be three months, but it dragged on until it was ready for cars to drive along around December last year.

“We see that the workers are still doing some touch-ups on the bridge, but altogether the project surely meets our expectations,” said Mr Gilbert Muofhe, of the KTA. “This bridge had killed people whom we loved. It is our plea to the government officials to avoid situations where people have to lose lives before they listen to us and act on our pleas or requests.”

Muofhe had been vocal about the collapsed bridge and decried the accidents it caused all the time, calling it a death-trap. The tender for the project was awarded to Nyoni-Future Joint Venture contractors earlier last year.

A road user who commutes between Vivo and Louis Trichardt every day, Ms Dimakatso Maopa, said that using the one-lane road for over six years after the bridge had collapsed had been difficult. “I am really relieved now, knowing that I can drive to and from work without the fear of driving into the gorge,” she said. “The fixing of the bridge brings with it some peace of mind to drivers.”

The senior manager at Roads Agency Limpopo (RAL), Mr Maropeng Manyathela, confirmed that the bridge had been opened for traffic since December last year. “Only minor things such as road markings are outstanding,” he said. “The project will be completed by 31 May 2019.”

Mr Gilbert Muofhe, of the Kutama Traditional Authority, says the traditional council is relieved after the bridge has been fixed.