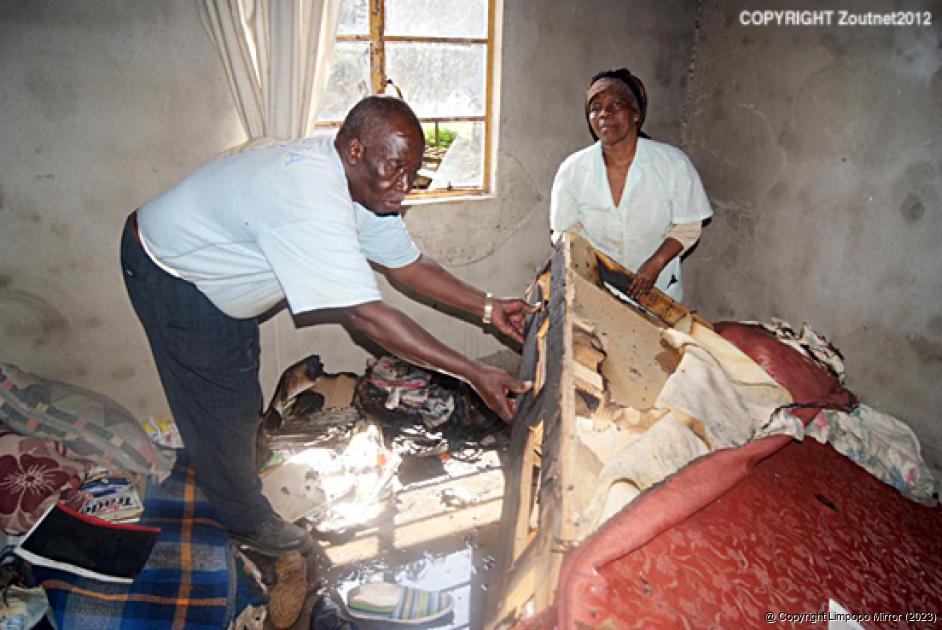 Familly members busy removing a bed that was damaged in the fire.

A family from Makhura village near Vleifontein is being tormented by mysterious fires and stones that rain down unexpectedly on their house.

Limpopo Mirror visited the family last week, shortly after a fire destroyed a bed, chairs and books. The family members also complained that window panes were smashed by stones.

The owner of the house, Mr Samuel Makhura, explained what had happened during the latest incident. According to him, he was resting on his sofa with his wife, still trying to figure out what could be turning his life upside down, when he became aware of the smell of smoke. On inspecting where the fire had emanated from, he was surprised to see smoke billowing out from one of the rooms. "When we went to that room, we found that the clothes and bed in my son's room were on fire," he said.

"My wife managed to control the fire with water from a tap," said Makhura. “I could not believe my eyes when a stone came flying from my sitting room and smashed a window pane. Since then, other stones and invisible objects keep on smashing my windows and the damage keeps on increasing on a daily basis. The fire started again last Saturday afternoon in the same room and then again on Sunday afternoon. The fire was extinguished with the help of the neighbours, who were also keeping a watch over the house," he said.

The family members now fear that a spell had been cast on the house, which is making their lives difficult. At the time of going to press, seven windows had already been damaged. The close family members were offering their moral support, but their spirits were down as everyone seemed to be depressed by the events.

"I have lost valuable property and I am afraid I won't be able to replace it with my small grant," said Makhura, who has been sleeping under a nearby tree with his wife since the fires started. “I do not know why this happening. I do not know who is behind this and I also do not know if I owe anybody anything. I have had enough of these fires, and our lives as a family have been turned upside down,” said Makhura.

He said religious leaders from different churches had visited them, but there has not been any change as the fire continues to wreak havoc. “We have sleepless nights here. How can one sleep when one does not know when the next fire will break out? Life is really bad here,” he said.

A community member, Ms Tshifhiwa Rambau, said that community structures were discussing the issue and several people had visited the family to pray for them. Rambau said that the family also need counselling as they were going through a tough and difficult time. "We appeal to anyone who can assist the family to come forward before the whole house is destroyed," she said.

The police spokesperson for the Makhado SAPS, Capt Maano Sadiki, confirmed that the fire and damage caused by the stones had been reported to them. Sadiki said that they would send their experts to investigate.

Some of the books and other items that were destroyed in the fire.