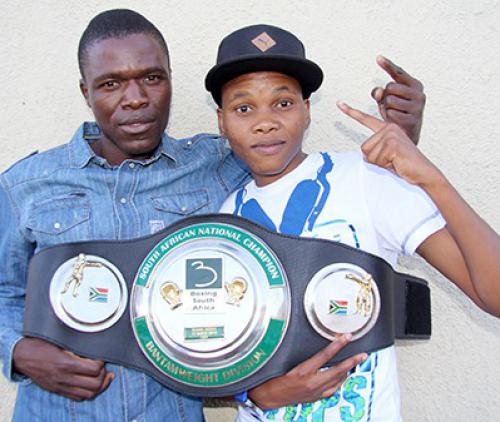 Neluonde has been throwing big punches in the world of boxing

The old saying goes that a prophet will not be honoured in his hometown, and perhaps this is true for one of Vhembe’s most prolific boxing coaches, Mutavhatsindi Immanuel Neluonde.

Neluonde (41), who hails from Tshitombondo near Thohoyandou, has produced several South African boxing champions, but has received little recognition in the Vhembe District.

He joined the world of boxing in 1993 when he was still in Tshiluvhi Primary School, under the guidance of former professional boxer Ntshengedzeni “Hugger Boy” Netshivhera.

In 1996, he signed a deal with the Sibasa Boxing Club under the veteran trainer, Mr John Nemakonde, where he gained more experience. He trained and sparred with his best friends Avhashoni Mbedzi, Ndifelani Manyelenyele, Muvhuso Nedzanani and others. Three years later, he moved to Gauteng and joined Ralph Boxing Gym in Florida, where he met the legendary trainer, Nick Durandt.

“I told Durandt I wanted to be like him and be the best trainer/producer in the world. He told me it is possible as long as I think positive and ignore negativity,” Neluonde said.

In 2000, he opened his own boxing club with the help of the late Christopher Mukwevho and attracted more amateur boxers. In 2003, he joined the Giyani Boxing Club, where he rubbed shoulders with professional boxers such as Zacharia Mudau, Phathutshedzo Dongola and Kenneth Hlayisi.

“I also produced a female boxer, Bukiwe Nonina, who made history by defending her SA title five times in a row without being defeated. Nonina also won the 2016/2017 boxer of the year award under my guidance,” he said.

“I worked with the former IBO world champion Tsiko Mulovhedzi, who quickly got fights in the Kingdom of eSwatini and Moscow in Russia. I also took heavyweight champion Osborn Machimane to compete in the United States of America, Spain and Russia,” he said.

“In the USA, I met with big guns in the boxing world - the likes of Floyd Mayweather, Roy Jones Jnr and Mike Tyson. I have learnt a lot from them,” he said.

Neluonde opened his own boxing camp, Mutavhatsindi Boxing Academy, but his plans were marred by the outbreak of the Covid-19 pandemic. “We had to close the gym until further notice,” he said.

“Boxing is not easy without sponsorship. I thank Muma Investments and Bonglez Accountants and Tax Consultants for being there for my team and keeping us punching, not forgetting the MEC Nkakareng Rakgoale. She was always there for our boxers, using her own money,” he said.