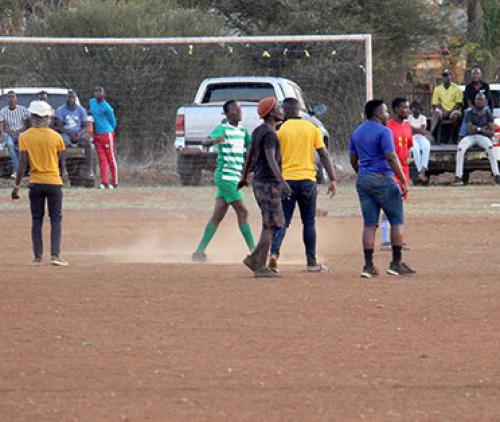 The match between Manavhela Real Fighters and Maebane Sport Academy, which had to be replayed at the Tshiozwi Grounds on Sunday, also ended in chaos. With 15 minutes left in the match and the score on 1-0, Fighters’ supporters stormed onto the pitch to stop the match.

The two teams are contesting for the title of champion in their stream in the Makhado Local Football League. During the first clash, played on 29 of August at Manavhela, the match had to be abandoned. The referee who was officiating this match, Mr Khangala Ralutanda, was allegedly assaulted by Academy supporters. Sport Academy’s supporters accused him of being biased when Fighters scored a goal to take the score to 3-2.

The case was heard by a disciplinary committee (DC) on Friday, 3 September, and the DC recommended that the match be replayed on Sunday at the Tshiozwi Grounds.

On Sunday, what quickly became evident was that something unusual would happen. Halfway through the second half, fans of Real Fighters stormed onto the pitch, forcing the PSL referee, Mr Jelly Chavani, to stop the game. The players of Fighters tried their best to persuade their supporters to leave the pitch, but the latter refused. The supporters said that they were not satisfied with the DC decision to have the match replayed, especially in light of the seriousness of the assault charges.

The manager of Maebane Sport Academy, Mr Mashudu Mushandane, said that his team was leading 0-1 when the supporters of Fighters invaded the pitch. He confirmed that during the chaos, the officials and players of Fighters tried to calm the situation by requesting their supporters to leave the field, but they refused.

The secretary of Makhado LFA, Mr Freddy Phathela, said that they were very concerned about the incident. “We want players to use soccer as a form of entertainment and create friendships. Manavhela Real Fighters will be called to appear before a disciplinary committee on Saturday 11 September and they will be charged for the abandonment of the game,” he said.