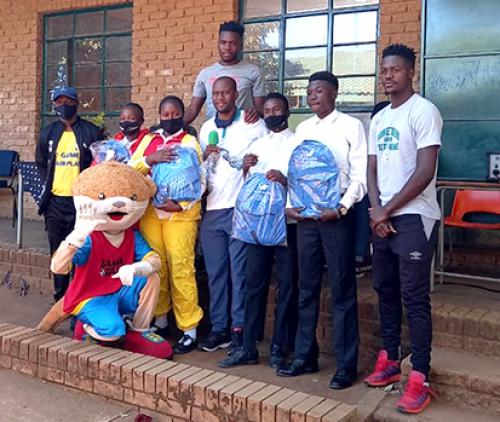 Mr Victor Hlungwani (holding microphone in the middle) poses for a photo with some of the pupils from Marimane High School, holding plastic bags containing stationery. Photo supplied.

Football legends on a roadshow

Several former football players and officials embarked on a roadshow earlier his month under the banner of Limpopo Sports Wise. According to the general manager of the programme, Mr Victor Hlungwani, the roadshow started two weeks ago en ended last Friday. Just like in previous years, the legends visited several schools in the Vhembe and Mopani districts.

Their first stop was at the New Era College at Xitlhelani village in the Malamulele area. The roadshow proceeded to the Marimane High School at Mbokota village outside Elim Hospital the following day. The legends had a rest on Wednesday because of the public holiday. They planned on visiting Abel Junior Secondary School in the Tzaneen area on Thursday. Their last stop was to be at the Ndengeza High School outside Giyani on Friday.

According to Mr Hlungwani, the legends shared the podium everywhere they stopped to deliver some lessons to the pupils. He said that some of the lessons they delivered covered topics such as drugs and alcohol abuse, bullying, HIV/Aids and teenage pregnancy, financial management and sports. Mr Hlungwani, who is a professional football referee, said that they had presented stationery to the pupils at all the schools they had visited.