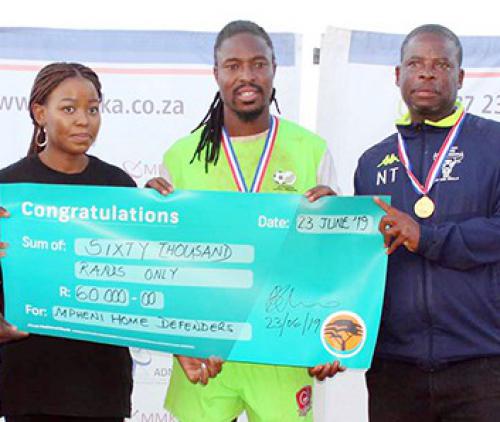 Mpheni Home Defenders will represent the SAFA Vhembe Regional League in the provincial promotional playoffs to be staged at the Jane Furse Stadium in Sekhukhune this weekend.

Home Defenders beat Madridtas FC 5-3 in the final of the MMK Administrators champ of champs at the Makhuvha Stadium on Sunday.

The player of the tournament award was presented to Home Defenders midfielder Emmanuel Mphephu. Hector Mulaudzi of Home Defenders and Ndolivhuwa Nthambeleni of Madridtas received the top goal scorer’s award. They scored four goals each.

Although they missed two clear chances in the opening minutes, Home Defenders did not lose their fighting spirit. The first Home Defenders’ player to cause an upset was Dakalo Nwanamidwa. He fumbled with the ball next to the goal line until he lost possession.

Madridtas took the game to their opponents after introducing Gift Nemutandani and Maanda Munyai for Sipho Masia and Israel Baloyi. Madridtas were the first to blow the trumpet. They were awarded a free kick in the 25-meter area. Nganea Nenguda beat the keeper with a half volley from the free kick to bring the half-time score to 1-0.

A substitute, Hector Mulaudzi, scored the equalizer for Home Defenders late in the game. The winner was determined through a penalty shootout as the score was 1-1 at the end of the regulation time. Home Defenders converted four of their five chances while Madridtas scored two from the white spot.

The best player of the tournament, Emmanuel Mphephu of Home Defenders, receives his trophy from Mr Fhatuwani Magogodela from MMK Administrators.

One of the top goal scorers, Hector Mulaudzi of Home Defenders, receives his trophy from Mr Fhatuwani Magogodela from MMK Administrators.