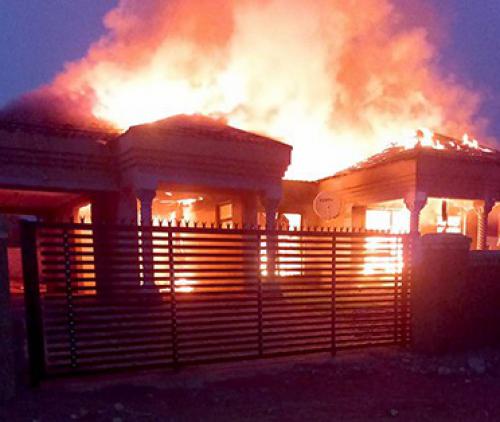 The police are investigating a case of arson after the eight-room house of well-known soccer player Rodney “Rama G” Ramagalela at Mamvuka village in the Nzhelele area burnt down on Tuesday morning (16 November).

The former Black Leopards and Mamelodi Sundowns player and current Chippa United player said he could not believe his eyes when he saw his house burning down on photos that were sent to him.

“I was called by my neighbours, who informed me that my house was on fire. The neighbours told us that they had heard an explosion, followed by the fire,” he said. “For now, there is nothing to suspect because I was not there. I will leave it to law enforcement to do their investigations, then we will get an answer on what happened. Luckily no one was injured in the fire, and we have only God to thank for protecting us.”

According to the neighbours, everything was good and normal at 4:20 that morning. Only ten minutes later, the whole house was in flames.

Ramagalela said that everything inside his house had been burnt to ashes. “The fridge, kitchen unit, beds, my TV, money, clothes, ID, food, medals, a trophy I had won at the PSL for being top goal scorer, and furniture had all been destroyed in the fire.” The fire also damaged the roof and walls of his house. According to Ramagalela, the total damage to his property is estimated to be more than R1 million.

“I am now appealing to any good Samaritan out there to come and assist me. What I want is to have a roof over my head,” he said.