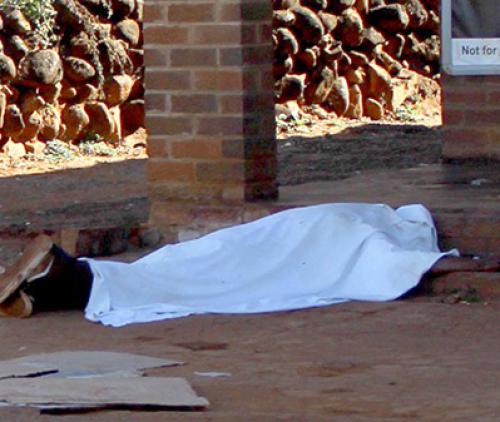 The body of Mr Fhetani Ramunenyiwa was found at a liquor outlet in Louis Trichardt on Saturday morning. Photo: Kaizer Nengovhela.

Two suspects have been arrested in connection with the death of a man who was stabbed outside a liquor outlet in Louis Trichardt. Two people were murdered in separate incidents the past weekend in the Louis Trichardt area.

The body of a 52-year-old man from Tshiozwi was found next to a liquor outlet in Louis Trichardt early on Saturday morning. The same day, a Zimbabwean citizen was allegedly stabbed to death in Eltivillas.

Spokesperson for the Limpopo police Brig Motlafela Mojapelo said they were alerted early on Saturday morning that someone had died near the Skheberesh Café in Erasmus Street. The police proceeded to the scene and found the lifeless body of a man, identified as Mr Fhetani Ramunenyiwa. He had deep stab wounds to his head. A murder docket was opened.

“The motive for the killing is unknown at this stage,” said Mojapelo. Two men, aged 41 and 28 years, were arrested on Tuesday in connection with the killing of Ramunenyiwa. They were scheduled to appear in the Louis Trichardt Magistrate’s Court on Thursday, 20 May.

Mr Freddy Ramunenyiwa, the elder brother of the deceased, said that the family was still processing this tragedy. “We received a call from the police, who told us they had found the body of a man at a liquor outlet in Louis Trichardt. When we got there, we found that it was my brother, who had wounds to his head,” he said. “It was a terrible sight. We could not believe that it was him. We are very shocked, but we are not pointing fingers as we have faith in the police, and we believe that their investigations will reveal what had actually happened.”

Another man, Morris Taurai Gapare (41), was stabbed to death near the Vrugteman Liquor restaurant in Eltivillas. The man was allegedly stabbed after an argument had broken out between him and another man. Gapare was stabbed several times in the head with a sharp object. Mojapelo said that the incident had occurred at about 19:30 on Saturday. He said that the investigators were still looking for the suspect, who is still at large.

Ramunenyiwa will be buried at the Tshiozwi cemetery on Friday, 21 May.