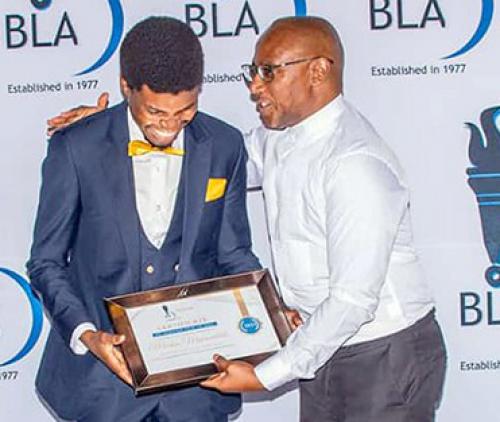 Filled with excitement, Mr Makondelele Mudau receives his certificate from the advisor of the Minister of Transport, Mr Kaizer Khoza. Picture supplied.

Mudau takes up seat as treasurer of Black Lawyers Association

Makondelele Mudau (32), born at Ha-Luvhimbi village, is an attorney who has achieved several milestones in the law fraternity, with his most recent being voted in as the new treasurer of the Black Lawyers Association in Gauteng. He now serves on the branch’s executive committee.

Mudau, who is no stranger to leadership as he previously occupied the position of head of events coordinating at the same branch, completed his studies in Bachelor of Law (LLB) at the University of Venda in 2009.

“Being voted in as the Treasurer of the Black Lawyers Association’s Gauteng branch is a big achievement for me,” Mudau said. “It affirms my passion for law and the career path I took. I will continue to be the voice of transformation for the legal profession, addressing major issues such as the problem of skewing briefing patterns.”

He said the fact that he had been voted in showed the confidence his fellow attorneys and members of the Black Lawyers Association had in him. He recalled the time when he was doing Grade 10 in 2006. One of the subjects he took was history, and the content had a chapter explaining about Apartheid and the formation of the ANC.

“I was fascinated by the subject, and I learnt that a majority of those who formed the ANC, or who led in various structures, had been lawyers,” he said. “The likes of Alfred Mangena, Pixley ka Isaka Seme, George Dixon Montsia, Oliver Tambo and Nelson Mandela. I developed a strong desire to also study law, my aim being to liberate the people like what the former leaders had in mind.”

Mudau is a co-founder and director of Mudau & Netshipise Attorneys, a firm of attorneys based in Pretoria, Johannesburg and Alberton.  “I head the labour and criminal department and have appeared in high-profile cases as an attorney representing either the accused persons or companies. I appear in both the high courts and lower courts, including tribunals such as the CCMA and bargaining councils.”

After completing his law degree, Mudau was enrolled to study a six-month practical legal training course at Polokwane School for Legal Practice. He then did his articles through Legal Aid South Africa, stationed in Durban, for a period of a year. In 2015, he was admitted as an attorney of the High Court of South Africa by the Pretoria High Court after he had satisfied all the requirements to be admitted as an attorney.

“I consider myself still young, but through integral living, a noble character and my God-given wisdom and passion, I have been given this incredible opportunity to be among leaders and carry this responsibility, which allows me to serve and encourage those that look up to me,” he said.