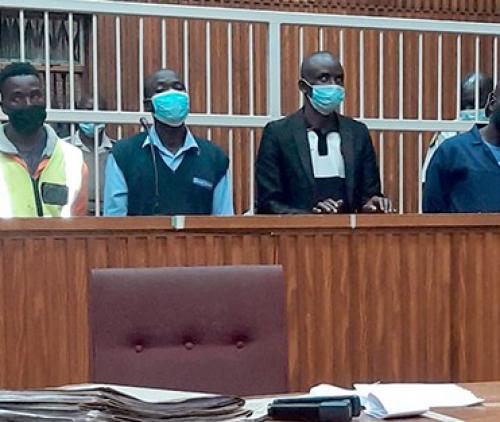 From left to right: Tshianeo Mabuda, Dakalo Tshivhase, Thabelao Nekhondela and Lazarus Ndifelani appeared in court on charges of murder. Takalani Tshivhase (not in the photo), who is the owner of the car whose keys had allegedly been stolen by the deceased, was arrested and charged first. Photo: Silas Nduvheni.

'They killed my son for something he didn't do'

Ms Elelwani Ramavhulela of Maniini Block L harbours great resentment after her 22-year-old son was killed by a group of men because he allegedly “stole someone’s car keys”.

The incident occurred on Saturday, 18 September, at about 14:00 in the afternoon. Ramavhulela told the media that she nearly collapsed when the local police in Thohoyandou came to her home and informed her that her son, Mukundi Tshikosi, had died as a result of assault.

Mukundi had apparently been drinking at Jerusalem Eating House in Golgotha, Thohoyandou, on the day of the incident, when he was accused of stealing someone's car keys. A group of men then allegedly dragged him outside and drove to Phiphidi village, where they viciously assaulted him with rocks and sticks and afterwards left him for dead on the street.

Ramavhulela, however, is adamant that her son had been falsely accused. “I was surprised because Mukundi was someone who strived to get things for himself, rather than steal. That was the reason why he was self-employed. Look, they brutally killed my innocent child for something he didn’t do,” the distraught mother said. “I want the law to take a stand and heavily charge these people who killed my son. I will never forgive them for what they did.” Mukundi had his own photography business, based in the Thavhani Mall.

Sergeant Vuledzani Dathi, spokesperson for the police in Thohoyandou, said they were investigating a case of murder. He said that the police had been telephonically notified by community members about a man who had been found lying in the street in Phiphidi village. The unconscious man was heavily bleeding, and rocks and sticks were lying around him. He was taken to hospital for medical treatment, where he later succumbed to his injuries.

Five suspects were arrested in connection with the incident and charged with murder. Dathi said he could not rule out the possibility that more suspects could be arrested.

The Limpopo spokesperson for the National Prosecuting Authority, Mashudu Malabi-Dzhangi, confirmed that Tshianeo Mabuda, Dakalo Tshivhase, Thabelao Nekhondela, Lazarus Ndifelani, and Takalani Tshivhase, the owner of the car whose keys had allegedly been stolen by the deceased, had appeared in the Thohoyandou Magistrate’s Court on 24 and 27 September respectively. The case was postponed to 6 October for further police investigation and the suspects will remain in custody.