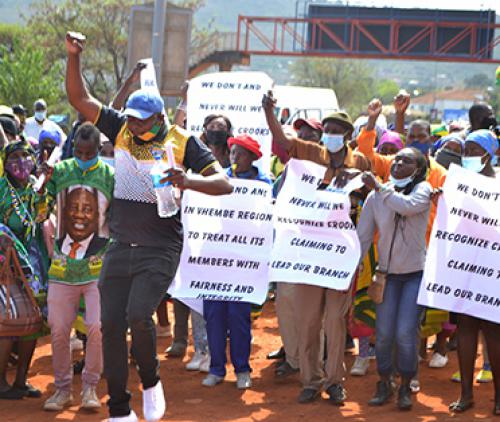 Some of the disgruntled ANC members of Ward 26 in Collins Chabane marched to the ANC Vhembe regional offices in Thohoyandou on Monday, 30 August, in protest of “bogus” members elected at the branch general meeting. Photo: Silas Nduvheni.

Some ANC branches in the Vhembe district are under pressure to re-run its elective meetings because of grievances about the manner in which the names of candidates were decided on. Whether this will be achievable is uncertain, because the names of the “disputed” candidates had already been submitted to the IEC.

On Monday, 30 August, Ward 26 in Collins Chabane too came under attack as a group of about 300 protesting ANC members marched to the ANC Vhembe regional offices. The protesters were highly indignant about “bogus” members who, they claim, attended the branch executive committee meeting held at Madadzhe Primary School in Ha-Tshikonelo village on 9 August.

“We are concerned about bogus memberships. We want the branch executive meeting to be re-run and ANC Vhembe regional committee members to be part of it, as the previous meeting had been conducted unfairly,” said veteran ANC member in Malamulele Hasani Maluleke.

According to Maluleke, they will not recognise the people elected during the meeting of 9 August, as “only friends” had been invited, while the rest of the branch members were left out. “We were excluded from the previous meeting. How can we recognise such a meeting? We lodged our complaint with the ANC Vhembe regional office in Thohoyandou on 10 August and didn’t get feedback on it, so we decided to march,” said Maluleke.

Maluleke was joined by other dissatisfied members, who marched and chanted in front of the ANC Vhembe regional offices. They demanded feedback on their concerns raised. He said that, while they accepted the reply they got from the regional office, they would be even happier as soon as the dispute was finalised with the national office.