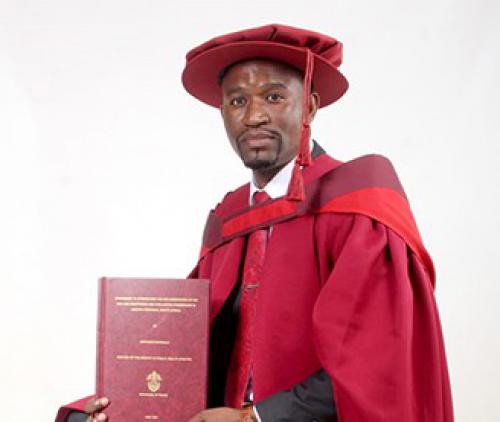 Dr Ndivhuho Mangale is a man of many professional qualifications. Picture supplied.

'Hats off to the women who take us to school!'

Dr Ndivhuho Mangale gives credit to his mother and grandmother for his academic achievements. They are the people who invested their last money, so that he could enrol for his PhD. Mangale graduated with a PhD in public health from the University of Venda two weeks ago.

“I started my undergraduate degree in 2003 with only the registration fee of R850, which I got from my mother, who was a domestic worker, and my grandmother. The support I got from them makes me respect the women of our country even more, because they don’t see these kinds of sacrifices they make for us as sacrifices but as a gesture of love. Hats off to the women who take us to school!” he said

Mangale was one of 33 students to receive their doctoral degrees during the University of Venda’s 39th graduation ceremony two weeks ago. The university awarded 2 265 undergraduate degrees, 224 honours degrees, and 56 master’s degrees.

His PhD thesis was on developing strategies to strengthen the monitoring and evaluation of the HIV and AIDS programme.

He reflected on the hardship he went through while studying. His father lost his job in 2002, just as he went to university, which left Mangale ever more financially unstable. “Sometimes I missed lectures because I didn’t have transport money,” he recalled.

“My father used to take on piece jobs just to put food on the table, ploughing fields and earning as little as R20 per day,” he said. “I came close to dropping out from university every year, as the bursary only paid 50% of my fees. But I found my account settled, thanks to the SRC’s intervention, and I never gave up. I was relieved when I received a bursary to complete my studies during my final year.”

Mangale received a few accolades over the years, including being nominated as a finalist in the Mail & Guardian Young South African 2017 awards.

He is now a monitoring and evaluation specialist with 13 years’ work experience to his name. He never allowed his unfavourable background to deprive him of a bright future.

Mangale encourages the youth to stay focused and determined in working towards shaping their future for the betterment of their lives. He wants young people to know and believe that they can make it in life if they are persistent and focused enough.