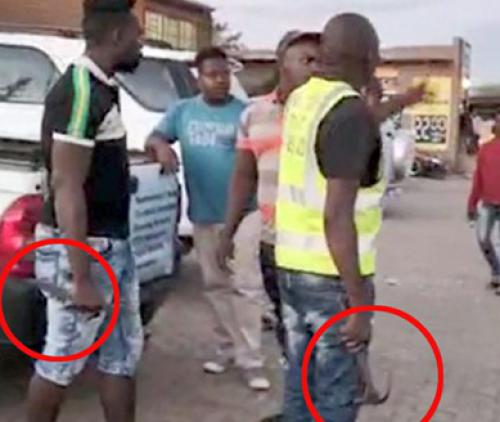 Some of the people in the video can be seen wielding knives and even a hammer.

Ugly scenes of violence at ANC branch meeting in Musina

A branch meeting of the African National Congress (ANC) in Musina the past weekend turned ugly when violence broke out. In a video circulated on social media people being assaulted outside the premises can be seen. One of the attackers was wielding a long hunting knife, while the other was holding a hammer.

The violent incident followed the branch general meeting (BGM) for Ward 4 held on Sunday at the community hall in Nancefield. What had caused the conflict is not clear. The incident was condemned by the ANC’s Vhembe structures.

“We are clearly not going to allow this foreign tendency to become a norm in Vhembe Region of the ANC,” said Tshifhiwa Dali, the spokesperson for the ANC in the Vhembe region. He also said that the two thugs who could be seen terrorising people outside the venue did not appear to be ANC members.

“We will investigate their presence at the ANC meeting. The branch will submit a comprehensive report with recommendations to the regional office. Should we find that any member of the ANC is involved in the criminal act of hiring these thugs to disrupt ANC processes, stern disciplinary action will be taken against such members for gross misconduct of, but not limited to, bringing the ANC into disrepute,” said Dali.

The ANC also commended the Musina police for the swift arrest of a suspect in connection with the attack.

Dali said that such violent behaviour during the movement’s events took the focus away from their primary objective of bettering the lives of ordinary people.