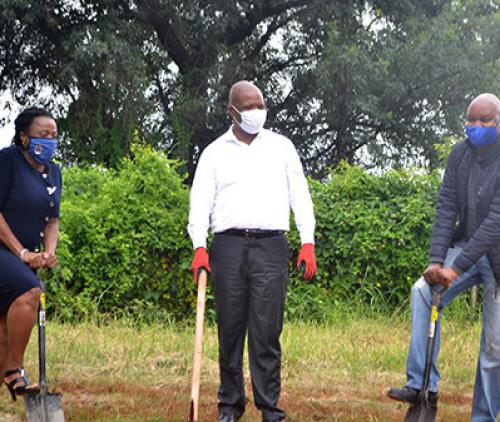 Professor Vhonani Netshandama (left) and Professor Takalani Mashau (right), both from the University of Venda, photographed with the MEC for Public Works, Roads and Infrastructure, Mr Namane Dickson Masemola (middle), during the sod-turning ceremony.

The school was started in 1999 to cater for maths, science and commerce learners and was housed in the former Venda College of Education buildings near the gate of the University of Venda. However, these buildings are now old and dilapidated.

Masemola, who was joined by councillors in both the Vhembe district and Thulamela local municipalities, as well as the University of Venda’s representatives, handed the site over to the contractor, Mr Mashaka Ravhura, during the official sod-turning ceremony held on Wednesday, 3 February.

He said that the upgrade of the Marude Secondary School was part of the infrastructure upgrade projects at six schools that he and the MEC for Education, Me Polly Boshielo, have launched together on 26 January this year.

According to Masemola the project is expected to boost the local economy with around fifty temporary job opportunities to be created.

However, Masemola warned that sloppy work in building the centre will not be tolerated, and he urged the university of Venda as well as the municipalities involved to actively take part in monitoring and evaluating the work during the construction phase.

“The upgrade will comprise of, among others, the construction of three new combo technical workshops, one nutritional centre, five new classrooms and 18 new waterborne toilets, as well as the renovation of existing classrooms. We want to see the school progress well after building them better infrastructure, as these modern buildings mean nothing if matric results do not improve,” Masemola said.

Cllr Thina Mbedzi, a councillor in the Vhembe District Municipality, said she appreciated the efforts by both Departments of Education and Public Works and Infrastructure, which will surely provide a better environment for learners.

Mbedzi pledged their support as the District Municipality and said they will form steering committees to assist in checking on the progress of the project.

The principal of Marude Secondary School, Mr Alex Muthelo was over the moon to learn that his old and dilapidated former Venda College of Education buildings will receive a state-of the-art make-over.

“It has been long overdue, as the project was scheduled to have started in 2016, but delayed by the Vuwani demarcation strike, which resulted in many rural schools being burnt down.  We now promise that we will work hard and improve the matric results, without excuse,” Muthelo said.