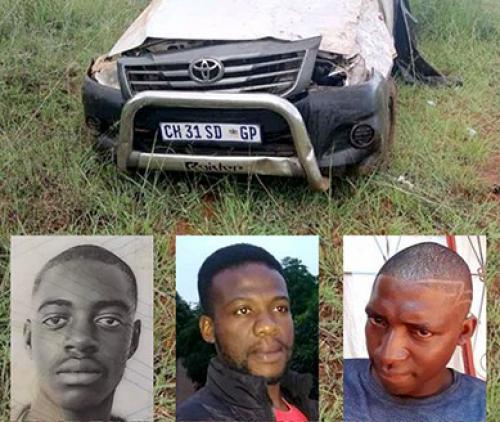 TOP: The bakkie in which five people from the Gaba, Begwa and Tshaulu villages were killed when the vehicle overturned on Saturday, 16 January. The inserted photos are of three of the deceased. From left are Tshifhiwa Munyai (23), Khumbudzo Ramanala (31) and Lindelani Makhado (24). Photos supplied.

What was supposed to be a fun outing to a soccer match turned into tragedy on Saturday when a bakkie overturned on the Gaba-Ha-Begwa road, killing four people and injuring scores of others. The bakkie was allegedly ferrying 28 passengers, who were on their way back from an informal soccer match.

The sad incident left the local community with many questions. This happened while Level 3 lockdown regulations are in place, forbidding such sport events and the gathering of groups of people. Apart from the danger involved in transporting people on the back of an open bakkie, the risks involved in spreading the coronavirus through such conduct were also highlighted.

Limpopo police spokesperson Col Moatshe Ngoepe said that the driver of the bakkie had been travelling along the said route with his full freight when he had allegedly lost control of the vehicle and it had overturned.

“Four male passengers from the overloaded vehicle were certified dead at the scene, while the other 24 passengers, including the driver, were in critical condition and admitted to the Tshilidzini Hospital. Another passenger later died in the hospital. The deceased were identified as Lindelani Makhado (24), Mulweli Likhona (17), Phatutshedzo Tshibalanganda (18), Tshifhiwa Munyai (23) and Khumbudzo Ramanala (31). The deceased were all males from the Gaba, Begwa and Tshaulu villages, which are adjacent to each other,” Col Ngoepe said.

The police are investigating a case of culpable homicide.

The SA Football Association (SAFA) expressed their concern over the incident because communities or individuals are not allowed to stage any soccer tournaments or games during level 3 of the Covid-19 pandemic lockdown.

The secretary general of SAFA-Vhembe, Mulimisi Muneri, said what was not known was whether the game had been a formal soccer tournament or a so-called Sigobelani (friendly game), as sometimes played in rural communities, but that the matter was being investigated.

According to Muneri, SAFA Vhembe had issued a circular, informing its affiliates once again that no games were to be played during this period. “We don’t stage tournaments or Sigobelani at this stage. We are still amazed that people are dead because of this. No one is giving us information as to which teams were involved. We only hear unconfirmed information, whether it was a tournament or Sigobelani,” Muneri said.

He advised people to stay home, as per the current lockdown regulations, unless they really had something important to do.

A family member of one of the deceased, Ndivhuwo Matshusa, said they were still in shock about the accident, which had robbed them of their loved ones. He urged parents to look after and guide their children in the right way, to avoid accidents of this nature. “We are appealing to the police to do a thorough investigation in finding out who instituted this game that killed our young and promising children. We expected these young people to be groomed to be our future leaders, but their lives were cut short,” Matshusa said.

Matshusa and other family members who lost their children in the accident have urged the government and the Road Accident Fund to compensate them, so that they can give the boys a respectful funeral.

The funeral is scheduled for Thursday (21 January) and each family will bury its loved one separately.