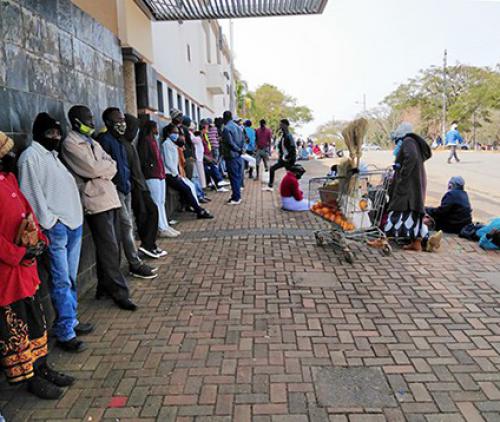 Many of the people queuing for their Covid-19 Social Relief of Distress grant at the Makhado post office came from out of town, some from as far away as 87 kilometres. Photo: Bernard Chiguvare.

Ruben Mukhakwedzwa from Nzhelele in Limpopo spends R50 to get to and from Louis Trichardt to collect his R350 Covid-19 grant. His local post office has not been able to pay him, he says.

When Groundup visited the Makhado post office in Louis Trichardt on Tuesday at around 10:00, a long, winding queue was waiting for payment of their Covid-19 Social Relief of Distress grants. Most of the people in the queue were from Nzhelele, 87 kilometres away, Elim, 22 kilometres away, and Madombidzha, 14 kilometres away. They said they had not been served at their local post offices, which ran short of money or had network problems.

“I lost hope of getting the R350 at our local post office,” said Mukhakwedzwa. “I have visited the post office several times last week as of Monday, 10 August, but I could not be served. At times they served only 10 to 20 clients and they [the post office officials] told us there was no money. They advise us to wait for any client depositing, so that we could withdraw that money,” he said.

A single journey to Louis Trichardt by bus costs him R25. He has to wake up at 04:00 to prepare for the journey.

“The week I tried queuing at our local post office. I used to wake up at 03:00 but never got anywhere near to being served. The post office is a walkable distance from my home,” said Mukhakwedzwa. He was drinking a 500ml mageu drink. “I have not had anything to eat since morning, and this is 10:30,” he said.

Lucky Baloyi from Elim claimed the queue at the Elim post office was much longer than at the Louis Trichardt post office and the service was very slow. “I queued for the money at Elim post office twice, but I could not dream of being served, so I decided to try this post office. Though I arrived here at Makhado at 06:30 and still have not been served, I notice the queue is moving fast and I hope to be served today,” said Baloyi. From Elim to Louis Trichardt he paid R17 for transport one way.

Baloyi used to work at a local restaurant in Elim but lost his job before the lockdown. To him, the R350 is a relief. “This money will assist me very much,” said Baloyi.

A woman from Madombidzha, who did not want her name used, said there was a post office within walking distance of her home, but she had not been able to withdraw her grant there. “The officials at Madombidzha Post office tell us all sorts of reasons - there is no network, there is no money - but what we have come to understand much is that most of the time these people are not serious at work.”

She said though she was scared of walking to the bus stop in the dark, on Tuesday she had left home at 04:00 and had joined the queue at Makhado Post Office by 05:00. She had not been served by 10:30 but was still hoping.

Post Office regional manager Kipchner Nkosi told GroundUp: “This trend of people coming to town, leaving their nearest post office, is all over the province. It’s people’s choice. We cannot deny them accessing the money from any branch.”

He said a burglary had taken place at the Elim Post office early last month and the computers had not yet been replaced.