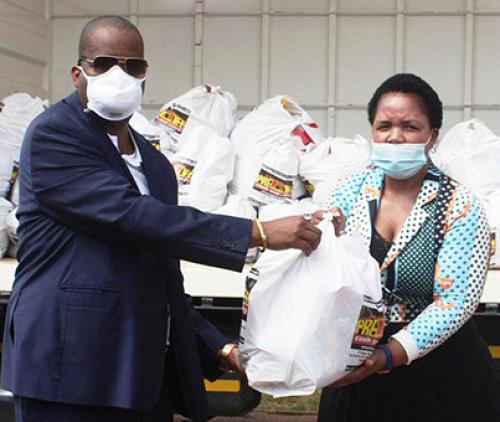 The MEC for Social Development, Ms Nkakareng Ragoali, called on community development workers and community leaders to help the government in identifying the needy to benefit from food parcels to be given to poor communities.

“We understand that some communities are not working due to the fact that their jobs were put on hold during this difficult period of COVID-19. We have encouraged people to stay at home during the lockdown, but we have to give out some food parcels to those people who have serious challenges in getting foods,” said Ragoali.

The MEC, who was joined by Khosikhulu Mphephu Ramabulana, Mayor Samuel Munyai of the Makhado Local Municipality and some councillors, handed over food parcels as part of the COVID-19 lockdown during an event at the Dzanani Royal Palace in Nzhelele on Thursday.

According to Ragoali, Limpopo is a rural province, with most of the people relying on odd jobs, which were put on hold due to the COVID-19 lockdown. “While staying at home, they need food to eat and I urge businesspeople to help in this regard.”

She congratulated Khosikhulu Toni Mphephu Ramabulana on taking the lead in remembering the poor and needy communities and urged other traditional leaders to learn from him and do something for the needy and poor.

Just when some poor and needy people were queuing to get their food parcels, representatives of the Venda Muslim Community arrived with trucks full of food parcels to be given to the needy and poor.

Mr Abdul Patel, representing the Venda Muslim Community, said it was part of their culture to give something to the needy and poor. “We will also pack our trucks full and travel with social development workers when distributing food parcels to the rural communities. We have the belief that if we give to poor and needy people, God will give us more,” said Patel.

One of the beneficiaries who received food parcels, Ms Tshilidzi Mampuru of Ha-Makatu village, said life was hard without food during this difficult period of the lockdown, but things had changed for the better for them as beneficiaries.