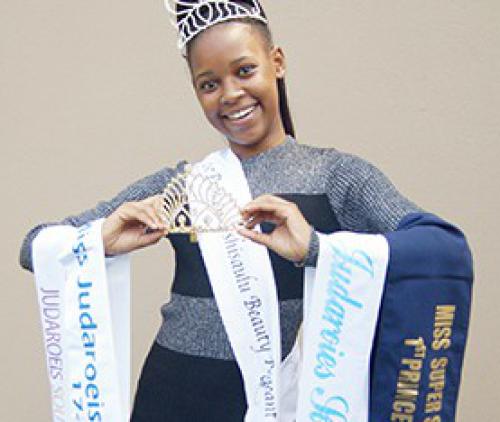 Munaka Tshovhota is a beautiful young who, in just one year, has scooped up five beauty pageant accolades.

Munaka shines on as a model

The 17-year-old Munaka Tshovhota is a beautiful young lady who, in just one year, has scooped up five beauty accolades.

The Grade 10 pupil at Dimani Agricultural High School and resident at Muledane (Thohoyandou Block J) would get compliments from people who saw her walking in the streets of Muledane and Thohoyandou, who all said that she walked like a model.

“I have had the walking gait of a model that some thought was something that I had rehearsed,” she said. “However, it's just natural with me. But then I took it from people's comment, and entered Miss Tshisaulu 2019, and I was crowned first princess – and that was only the beginning of many more prizes.”

She went on to win Miss Judaroeis South Africa 2019, where she was also named best traditional act (for best traditional attire) and recycling act (for wearing a dress woven out of recycled plastic shopping bags). She was named Miss Super Shine 2019/2020's first princess.

“This was my first year in the modelling world and I felt overwhelmed with joy,” she said.

With all the initial achievement that had come through hard work, Munaka had earned herself respect from the managing director of Barcelona Modelling Agency, Mr Godfrey Ndou, who signed her up with his agency. “Munaka is a young and talented model who will go places,” Ndou said. “She is one of our best models. She's listens, she is full of respect and always yearning to learn more in the industry.”

Barcelona Modelling Agency has 300 models contracted with them, and they continue to receive support from Clicks and other local businesses.

Mr Samuel Tshovhota and Mrs Portia Tshovhota are Munaka's parents, and they give her all the support she needs on this modelling journey. “We are proud of her and we make sure that we support her; we even attend events in which she participates,” they said.