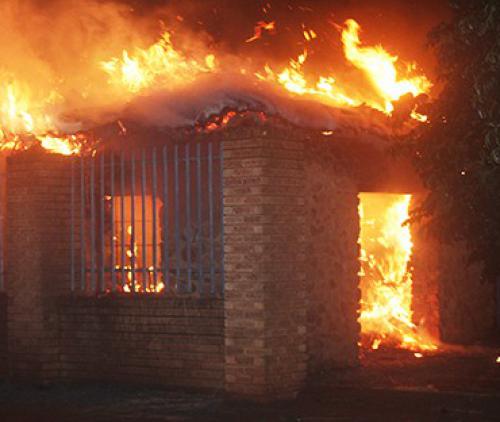 A burning house at Gogobole.

Angry community members in Gogobole and Tshiozwi set alight five houses and two vehicles on Wednesday evening. The houses and vehicles are allegedly the property of people suspected of partaking in crime in the area.

A community member, who wants to remain anonymous, said crime has become a worrying issue in the village. “People are tired of crime in this area. Since the beginning of this year there has been more than a hundred incidents of crime here. As leaders and community, we are trying our best to beat the scourge of crime.”

He added that community members visited suspects and people who allegedly transport stolen goods. “We will have a community meeting where we will discuss how we should go forward in the fight against crime. Street defence units are some of the solutions we are going to look into,” he said.

The police spokesperson in Limpopo, Brig Motlafela Mojapelo confirmed the incident and warned communities not to take the law into their own hands. He said that people should hand over criminals to the police so that they can be tried in a court of law. “We have opened a case of arson, and no one has yet been arrested,” he said.