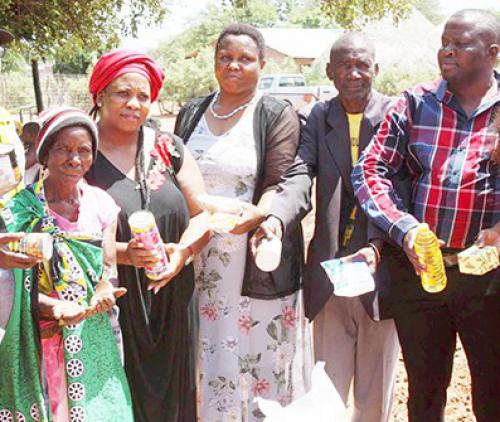 Granny Maria Mbedzi, one of the fllood victims in Tshiungani village in the Niani area (fourth from left), received some food parcels from Vhembe District Municipality and Musina councilors during the handing over on Thursday

Granny Maria Munyai (88) of Tshiungani village in the Niani area was lucky to survive when two of her mud huts were destroyed completely by the heavy rains that fell in most parts of the Vhembe region over the past weeks.

She lives with six members of her family. She said that she had heard an unusual sound when it was raining heavily, and later she found out that the mud hut in which she was sleeping, was falling apart.

She said she was surprised when another mud hut also collapsed during that time of the heavy rains. What also worried her was that the electricity to her place and some other affected households in her village was interrupted.

“Two school children’s uniforms and shoes were swept away and even some clothes of family members. We are left with nothing. We do not have any food for the family as the water destroyed it,” she said.

Granny Munyai was among the 27 identified flood victims’ households in Tshiungani who received food parcels donated by the Vhembe District Municipality.

During the handing over of food parcels at Tshiungani chief's kraal on Thursday, Granny Munyai said she was happy to learn that the Vhembe District had remembered them.