Masingita Shibambu, better known to the thousands of her fans as Ntombhi Ya Mutsonga, is still doing the happy jig after she won the Best Traditional Praise Singer of the Year award during the South African Traditional Music Awards 2021. The event was held at the Premier Hotel The Winkler in Mbombela, Mpumalanga, on 27 November.

Ntombhi Ya Mutsonga is a multi-award-winning praise singer who drives her social movements to promote art and cultural identity. She was born and bred at Matiyani village in the Malamulele area.

The dynamic young singer/poet, who is currently doing her bachelor of arts in media studies at the University of Limpopo, believes in building relations and interacting with different people. She has strong ambitions of strengthening communities and does that through her poetry and other charitable deeds.

“I grew up in a Christian-oriented family,” she said. “This prompted me to take part in various Sunday School activities, from drama, music and poetry, to storytelling. This is where I discovered my love of poetry.”

The first time she recited her poems before an audience of more than 500 people was during a poetry competition. “When I went on stage, I had this overwhelming feeling, and from no-where these words that I never even knew I had in me just started to gush out of me. Well, I won the competition and, to this day, have never looked back,” she said.

In 2015, she wrote a praise poem for her late grandmother at her 80th birthday celebration, where she got very good exposure; not only to her relatives and the local community, but also to people from surrounding villages who attended the ceremony.

In 2018, she recorded her first poetry video clip, titled Africa, which made the rounds on social media. The video garnered her interviews and features on local radio stations such as Mala FM and GCR FM. “I am also the Limpopo Music Awards’ Best Poet of the year in 2021, and the first Tsonga poet to usher in the President of South Africa at the State of the Nation Address on 13 February 2020,” she said proudly.

Shibambu, who is the founder of NYM ARTS ACADEMY, an art institution aimed at building and nurturing creativeness within rural areas, also featured on the Heritage Day celebrations hosted by the Department of Sports, Art and Culture on 24 September 2020. The event focused on celebrating South African Human Living Treasures, such as Gogo Esther Mahlangu, Gogo Katrina, Gogo Madonsi and Kokwani Noria Mabasa.

“I value empowerment, sharing inspiration with others and lending a helping hand to those in need, as it gives people a sense of belonging,” she said. 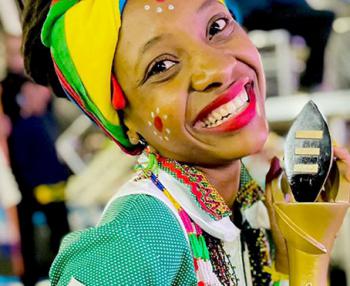