Local artist and art facilitator Avhashoni Mainganye’s work is currently on exhibition at the Polokwane Art Museum as part of the recent Polokwane Literary Fair 2021, courtesy of the Polokwane Municipality and the Goethe Institute of South Africa.

The multi-talented artist was invited as the main attraction to celebrate his lifelong career as one of Limpopo’s veteran artists. Mainganye’s creations, occupying the upper floor of the gallery, also serve to launch his retrospective exhibition to be held next year.

His artwork fitted in well with the 2021 edition of this literary fair’s theme ‘Ke Feminism ya mang?’ (Whose Feminism is it?), headed by the founding director, Mr Malose Lekganyane.

Mainganye’s collection is themed “Tribute to the Mother Spirit” and was first exhibited at the David Krut Gallery in Johannesburg in 2004, in celebration of great women such as Mbuya Nehanda of Zimbabwe and African American abolitionist and political activist Harriet Tubman.

“With the sculpture ‘Tribute to my Mother’, I pay direct homage to my beloved late mother, Vho-Masindi Sukalifhalale Tovhowani Mainganye. May her soul rest in peace,” he said.

Working from his home village of Phiphidi, Mainganye’s dexterous hands continue to produce one masterpiece after another that finds its home in art galleries around the world. “Teaching art and producing my own work add value to my life,” he said. “I have come a long way with this craft, having started from a young age. It’s like a calling; one cannot run away from it.”

Mainganye’s work is not only recognised locally but internationally as well, and up until now he has contributed generously to this industry in many ways. He does print-making, stone and wood sculpting, drawing and painting, to name but a few. He draws much of his artistic influence from his culture and traditions, and is always awed and inspired by the geographical beauty of his place - from the wildlife to the mountains and valleys.

He completed a two-year course at the Rorke’s Drift Art and Craft Centre, where he majored in lino printing and watercolour painting. “I have facilitated painting and print-making at Coker College in South Carolina and at North Hartville Elementary School. I taught print-making to mentally challenged pupils at a special school in Belgium in 2001.”

He was one of 18 South African artists who participated in the Spring in Chile cultural exchange programme in South America in 1995. In 2005, he worked for the one-time Soul of Africa Exhibition, hosted by the Development Bank of Southern Africa. “In 2008, I was named in the top five of the Sasol Works Art Awards, where I scooped up a R25 000 voucher for art material,” he said. “I was the only black person and only representative from Limpopo Province.”

In Vhembe, he has been running his own art classes for students from the Thohoyandou Arts and Culture Centre since 1999. “It warms my heart to know that many of the well-known artists from home today were taught by me and that they too continue to amaze the world with their talents,” he said. 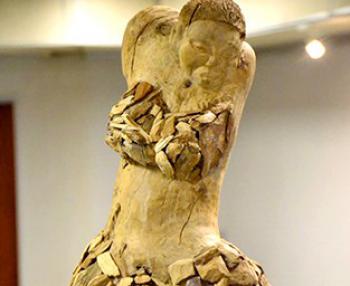