Jabulani Patrick Manyike is a seasoned sculptor from Mbhokota village whose creations carry both social and political meaning.

Manyike, who lives on the hill near the Ritavi and Musapa rivers, uses dead wood that he collects from the bush to craft his sought-after creations. To him, wood is the perfect medium to express himself.

“I can fashion a piece of dead wood into all kinds of artefacts,” he says. “I see visions of some of the objects that I finally craft and bring to life. I use a wide range of wood for my art pieces, including mbamba-ngoma, mondo, nkonono, xifati, n'wamuthangu and nyiri.”

Manyike obtained his motivation and inspiration from some of the greatest artists who had ever graced Mbhokota village, such as the late Jackson Hlungwani. But the blight of Covid-19 left his studio rather empty, compared to its former full and busy state. Like so many others, he struggles to maintain his livelihood in the same way as he had done before the pandemic.

“I have dependants, and I feel that I need to fully provide for them as I always have, but Covid-19 has blocked all the international visitors who used to visit our galleries here in the Robola Art Route,” he said.

The Robola Art Route incorporates a large group of artists, including veteran artists and art teachers such as Thomas Kubayi, Lucky Ntimani and Pilato Bulala.

Manyike was discovered by the prolific sculptor Ntimani, who introduced him to Kubayi, who is an internationally acclaimed sculptor. Kubayi was running Vutshila Art Centre then, where he coached and mentored young talent.

“Tatana Kubayi mentored me and created a space for me in his workshops, in order for me to practise my skills, while at the same time gaining new skills in the field of art.” Today Manyike is indisputably a full-fledged sculptor. “I am one of the fortunate people who didn’t refuse to listen to my teachers, who taught me art at no cost,” he said. “Today I am what I am because of them. But now I have managed to find my own style as an artist.”

Manyike is calling upon the Vhembe people to start visiting local artists and to invest in them by supporting their craft. He feels that art is as important in society as anything else. 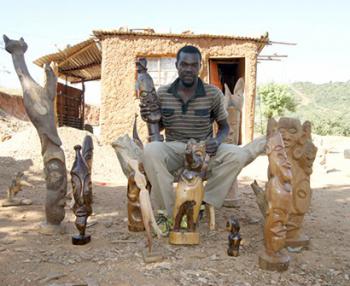