Up close and personal with Pushie

Tshimangadzo Pushie Manavhela, also known as Pushie Da Tall, is a soulful house artist with many devoted fans around the country.

A hairdresser and make-up artist of note, Pushie says she understands that one doesn’t make money overnight in the music industry, and that is why she has had to stick to her profession as beautician, while working on her music too.

“I discovered my musical talents at church when I was five years old,” she told the media. “I was still in Sunday school then and used to sing to such an extent that the Sunday school teacher appointed me as a lead singer, and that’s where my love for music grew. Music to me means life, comfort and the way of spreading the message.”

Pushie, who resides at Lukau village, believes that music unites people. She composes the kind of music that builds up the nation. “I don’t just sing or create music, I infuse meaning in my music. It is the artists’ duty to sing about social issues ranging from crime, unemployment and even love.”

She looks up to Sir McKleker and Ndivhudzannyi Masedza as her inspiration and said that she is confident that her grooming into the music industry is in the good hands of these talented musicians.

“Another person who inspires me is Msaki, who sings about life,” she said. “Her music speaks to the soul and it’s full of touching messages. It also encourages one to work harder towards reaching one’s goals and dreams.”

The highlight of Pushie’s music career was working with Dj Givergivero on a track called Mufunwa, because that was her first time recording, and according to her the song is doing extremely well.

Two of her songs that are currently making big waves are Deep in love and her most recent track called Kondelela.

Pushie is available on most social media platforms and can be contacted on Tel 079 424 2865. 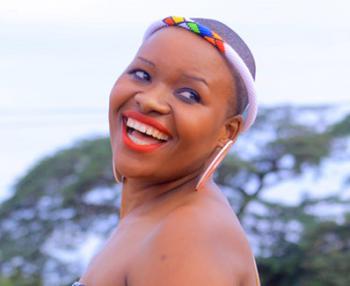 Pushie Da Tall, a beautician from Lukau village, is also making waves on the side in the music industry. Picture supplied.