The music industry is abuzz with news of the imminent release of a single by C-Man, featuring Mavin Kanyawayi, entitled Hold On.

According to C-Man, Hold On tries to discourage people from quitting, but instead to keep focusing on the positive side of life. “This world is saturated with people who always quit,” he said. “People always leave unfinished projects. People have good plans and ideas, but when they meet real challenges along the way they quit. Now this track encourages people to soldier on.”

The single was recorded at Ballitainment Media and at Farmville Ites in Malawi, with Ishmael newBreed Rammbwa as producer. “In this song, I hooked up with the famous Malawian reggae artist, Mavin Kanyawayi. I decided to cross the borders, so that my music will have that complete African feel.”

C-Man feels that to collaborate with Mavin Kanyawayi is a natural way of working as Rastas, as this forms part of what makes people human. This collaboration also adds C-Man's experience and it enhances his sources of inspiration. “I feel this collaboration with Mavin is expanding my work to a different dimension,” he said.

Mavin Kanyawayi, formerly well-known as Slo Tizo, is a promising upcoming reggae dancehall artist. He is a fourth-year student at LUANAR, pursuing a bachelors’ degree in general agriculture. Kanyawayi has the power of anticipation which has long since seen him thriving without a support system in his music career. 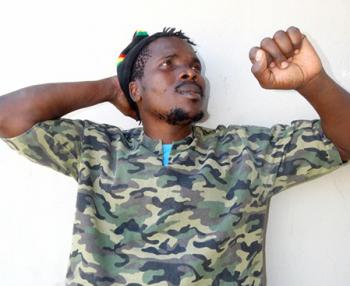