They were nominated in the Best Traditional Album category for their robust album, Sialala, and they are pitted against other equally talented groups, which are Makopanela Pineng, Mma Alusi, Qadasi & Maqhinga, and Tshwelelang Cultural Dancers.

“We are over the moon; we are really excited and happy about the nomination, which only means that we are treading on the right track,” said the group’s manager, Mr Mpho Miriri.

“We are looking forward to add one more award for our cabinet, and this time the big one is a SAMA26,” Miriri said.

“The songs have been widely welcomed, especially Sialala, which speaks about the eternity of our culture,” said Miriri. “It encourages the youth to respect and embrace our culture.”

The purpose of the group is to compose, sing and promote Tshivenda cultural music and spread culture through music. “We further aim to keep young people in one place, off the streets, and for them not to forget their cultural roots,” he said. “Most of our members are youths.”

They had previously scored a nomination for the #SAMA25 in the Best Traditional Group category, and they hope that this time around, with their second nomination, they will bring the award home.

Those interested in Vhavenda Cultural Group can phone Miriri on 061 426 5788. 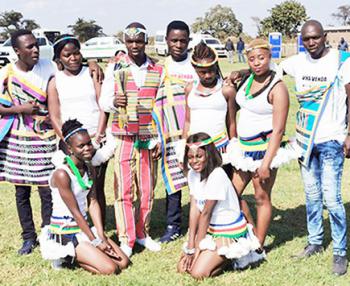