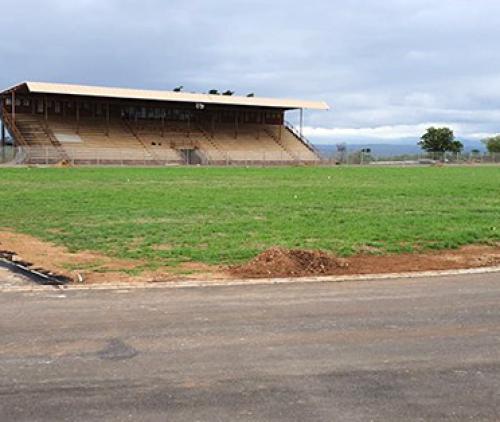 Leopards to play their matches at Malamulele stadium

Black Leopards, the Vhembe-based team playing in the GladAfrica League, signed an agreement with the Collins Chabane Municipality to play their home matches at the Malamulele Stadium.

During a media conference last Thursday, the executive mayor of the Collins Chabane municipality, Cllr Moses Maluleke, announced that the stadium would serve as venue for the matches, starting from December this year. Leopards were using the Old Peter Mokaba Stadium in Polokwane as their home ground because of the high rent charged by the Thulamela Municipality for using the Thohoyandou Stadium.

Maluleke said that the municipality was committed to bringing more games to Malamulele. “Our intention was really to attract people. The teams are out there, and they want the best possible deals. We are not intending to run it at a profit,” he said, but emphasized that they needed to maintain the facilities. He also confirmed that Leopards had plans to build a club village in the Malamulele area.

Leopards´ spokesperson, Divhambele Mbalavhali, expressed his satisfaction with the deal. “I think it is very important for us to be able to work hard to reach the Premier league. We need such partnerships, but we also want to appeal to members of the public and the media to go out there and assist us,” said Mbalavhali. He said that the team found travelling more than 100 km to play their matches in Polokwane difficult.

“We are moving from Polokwane in January to relocate to Malamulele,” he said. Mbalavhali said that the new village that would host the team would be finished in December.