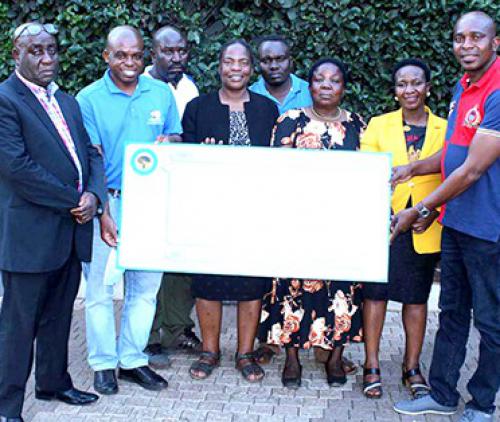 The sponsor, Mr Mpho Mathoho (right), hands over a cheque to the treasurer of the league, Mr Cedrick Ramaliba (second from left), while Mr Ephraim Singo (left) and other members of the executive committee look on. Photo: Frank Mavhungu.

Although the teams affiliated with the Thulamela Local Football Association (Thulfa) have already been contesting in the Mpho Mathoho Electrical KO Competition over the past few weeks, the competition was only officially launched during a ceremony held at the 2 Ten Hotel in Sibasa last Wednesday.

During the ceremony, the managing director of Mpho Mathoho Electrical company, Mr Mpho Mathoho, handed over a cheque to the value of R80 000 to the treasurer of the association, Mr Cedrick Ramaliba.  Mathoho said that his decision to sponsor the league was influenced by the fact that he knew the challenges the officials of the clubs faced in running the teams. “As a former football player and referee, I know how difficult it is to run a soccer team without a sponsor,” he said.

He said that the sponsorship would run for the next five years, with the sponsorship amount increasing annually. His company is looking at the possibility of becoming the league’s main sponsor in the near future.

Singo said that teams recently promoted to the SAB League would not take part in this prestigious competition. The final will be staged on Thursday, 16 December, at a venue still to be announced.