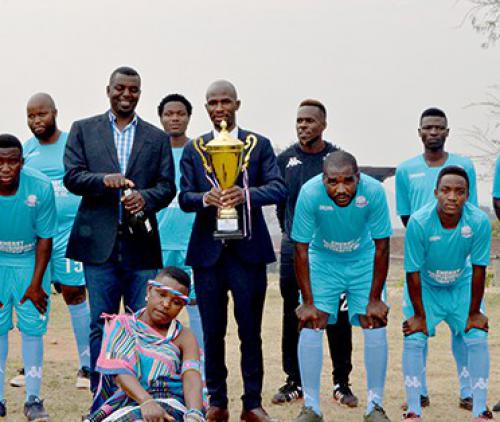 Founder and managing director of Lwamondo Mighty Brothers attorney Ernest Nemusimbori holds the trophy that he dedicated to his hardworking players after the team was promoted to the SAB League. Around him in the photo are the jubilant players. His father, Mr Matodzi Nemusimbori, stands next to him while his sister, Ms Ntsumbedzeni Nemusimbori (also called the team's Makhadzi), sits in front. Photo: Silas Nduvheni.

A group of young boys from the Lwamondo villages in Thohoyandou used to play only friendly soccer matches for Sigobela before they were transformed into the Lwamondo Mighty Brothers in 2020. Today, they are a proudly affiliated soccer team and have just been promoted to the SAB League.

“I used to work at Vuwani Magistrate’s Court as a legal representative and it concerned me that so many of the crimes presented to court were committed by young people from the Lwamondo villages. I was born and raised here and decided to do something for the young people, to keep them busy and off the streets. And that was when Lwamondo Mighty Brothers was formed,” founder and managing director of the team Ernest Nemusimbori said.

He motivated his players constantly and affiliated the team with the Thohoyandou Local Football Association (Thulfa) over the course of the year. After their victory over Diabuse FC in their promotional play-off, they have finally been promoted to the SAB League – just in time for the new season, starting this month.

Nemusimbori decided to reward the hardworking team with a big celebration party, held at Phophi Leisure Resort in Lwamondo–Tshishushuru on Saturday, 2 October. The team received a trophy and each player a medal at the event.

Nemusimbori said the team would have to work hard for them to make it to the ABC Motsepe League next season.

Lwamondo Mighty Brothers’ captain, Thuso Mangenge, is very happy that their hard work is being recognized. “We worked hard and practiced regularly. It is good to know our efforts are being recognised. We will begin with preparations for the new season, as it starts very soon,” said Mangenge.