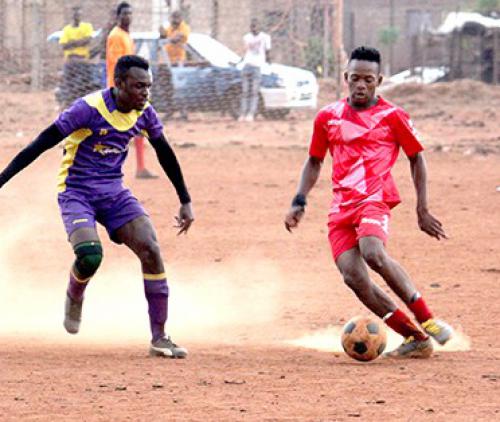 Madombidzha Try Again were crowned as the champions of the Mazamato tournament when they beat Mabaleng Hollywood bets FC 4-2, following a penalty shoot-out after the two teams had played to a goalless draw at the Zamenkomste Grounds on Saturday.

Try Again played entertaining football from the onset, but their strikers were unlucky. Gundo Maluma, Try Again’s right flank, missed an opportunity in the 10th minute. After beating two defenders in a row, he shot aimlessly from inside the box. The ball went far wide, much to the disappointment of the team’s fans.

Try Again soon realised that their day at the office would be a difficult one when their leading goal scorer, Tumelo Mpfumba, fumbled at the goal finish. He received a neat pass from Sedzani Ndadza within the box and shot wide with the keeper, Mashudu “Makumba” Munengiwa, already beaten. Mpfumba committed a similar blunder a little later. This time around, he failed to connect with Muladelo Ndou’s square pass.

Alugumi Mamugudubi, Mabaleng’ centre back, was lucky to get away with a yellow card. He obstructed Rudzani Rambau at the edge of the box in a one-on-one situation, denying Rambau what could have been a goal. The referee did the unexpected when he flashed a yellow card at a time when most of the fans thought he would give Mamugudubi his marching orders.

Mabaleng threatened to score for the first time in the 47th minute. Phindulo Mabasa received a beautiful pass from his captain, Ralinde Manenzhe, and unleashed aimlessly from close range.

Mushubi Mushukwa of Try Again disappointed the fans in the 78th minute. He won a loose ball from the left corner and ran a few steps towards the goals before beating the keeper. He caused an upset, however, when his shot hit the woodwork and landed outside the field of play for a goal kick.