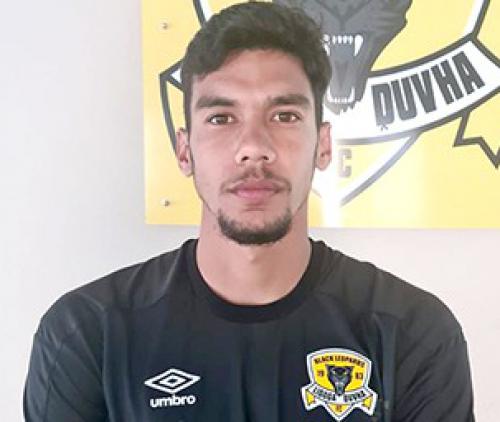 One of the Leopards' new recruits, Kyaan Bull. Photo supplied.

Black Leopards must beat University of Pretoria FC when they meet in their GladAfrica Championship League match at the Old Peter Mokaba Stadium in Polokwane on Sunday if they are serious about gaining promotion to the DStv Premiership Division at the end of the season.

The spirit is high in the camp of the University of Pretoria after they had collected the maximum points in their last match. Amatuks, as they are affectionately called, had managed to collect four points in their last two matches. They played to a goalless draw with TS Sporting last Saturday before crushing Cape Town All Stars 3-2 at the Absa Tuks Stadium in Pretoria on Tuesday afternoon.

The same applies to Black Leopards. Lidoda duvha beat Richards Bay FC 2-0 at the Umhlatuze Sports Complex in Richards Bay last Friday. They shared the spoils with Tshakhuma Tsha Madzivhandila FC (TTM), with whom they played to a 1-1 draw at the Thohoyandou Stadium on Tuesday.

Leopards’ defenders will have a mammoth task to stop the Amatuks’ forwards of Simnikiwe Mbonde, Kamogelo Pheeane and former TTM killer striker Wonderboy Makhubu. The Leopards’ right back, Ethen Sampson, will be available for selection on Sunday. Sampson watched the team’s last two games from the grandstand after seeing red in their game against Uthongathi FC at the Princess Magogo Stadium in Durban three weeks ago.

Tshakhuma Tsha Madzivhandila FC will travel to Johannesburg, where they will lock horns with Jomo Cosmos at the Tsakane Stadium on Saturday. The other match that will also be played on Saturday will be between Venda Football Academy and Richards Bay FC at the Umhlatuze Sports Complex in Richards Bay.