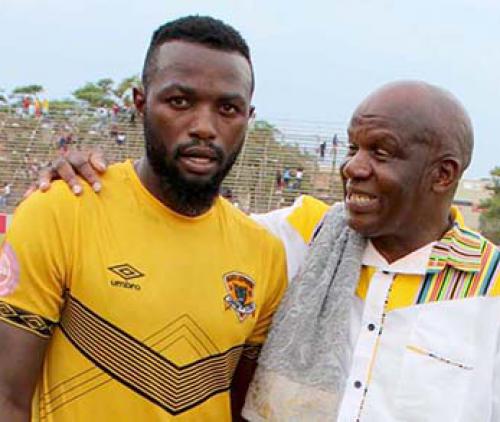 Former Leopards striker Mwape Musonda is in the Swallows’ nest

The former Black Leopards striker, Mwape Musonda, will be parading in the colours of the DStv Premiership League side, Moroka Swallows FC, when the league activities for the new season start in two weeks’ time.

Musonda was initially linked with Amazulu FC before Swallows unveiled him as their new signee on Monday afternoon.

The 30-year-old Zambian international started his football career at Zanaco FC in Zambia way back in 2012.  After spending three years at Zanaco, Musonda decided to try his luck in South Africa. The first South African club to offer him an employment contract was Orlando Pirates. He played for Pirates for one season and moved to Lamontville Golden Arrows on a one-year loan contract.

When his 30-month contract with Orlando Pirates expired at the end of the 2016/17 soccer season, Musonda became a free agent. At that stage, the clubs were reluctant to give him a job offer due to his poor form. Black Leopards took the risk and offered him a three-year contract. While at Leopards, Musonda scooped the Lesley Manyathela Golden Boot award in the 2018/19 soccer season with 16 strikes from 28 matches.

Musonda left Lidoda duvha for a lucrative job offer from the United Arab Emirates’ (UAE) side, Hatta Club, in October last year. After a short stay at Hatta Club, Musonda migrated to another UAE side, Al Sahel FC, on a six-month loan contract in January this year. When his contract with Hatta Club expired on 30 June, Musonda joined the millions of jobseekers worldwide.

Speaking to the Limpopo Mirror shortly after the team’s training session on Monday evening, Musonda revealed that he could not resist the lucrative job offer from “The Dube Birds”. He further stated that he had signed a two-year employment contract with Swallows.