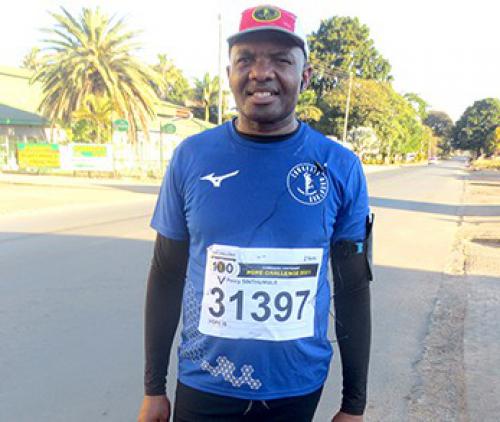 Limpopo Mirror caught up with Percy Sinthumule after he had completed a 21km run in the virtual Comrades Marathon on Sunday, 13 June. Photo: Bernard Chiguvare.

The Covid-19 pandemic has changed our way of living to an enormous extent and at various levels. We not only had to adapt our manner of interaction with one another on a day-to-day basis, but we also had to change the manner in which we participate in sporting events.

The annual Comrades Marathon, usually held in Pietermaritzburg, was done virtually this year on Sunday, 13 June. Limpopo Mirror caught up with Percy Sinthumule after he had just completed his 21km race.

“This is obviously not how we usually do it, but because of the pandemic we had to run it virtually. I normally do the 90km race, but today I only ran 21km,” Sinthumule (50) said. He completed the 21km in 2 hours and 15 minutes.

According to SABC News, more than 10 000 athletes registered for the virtual event and could choose from where they wished to do the race. They were allowed to start at any time from midnight on Saturday (13 June), but had to have completed their races by midnight on Sunday (14 June).

“I started around 13:00 pm, ran south along the N1 road and back to Louis Trichardt town,” said Sinthumule, who resides in Eltivillas.

Each athlete made use of an app that recorded the distance they had covered, and the time it was run. Afterwards, their results were sent through to the organisers.

Sinthumule, who is a born sportsman, did not waste any time after his race, but rushed along to play some soccer. This would have been his eighth Comrades Marathon.