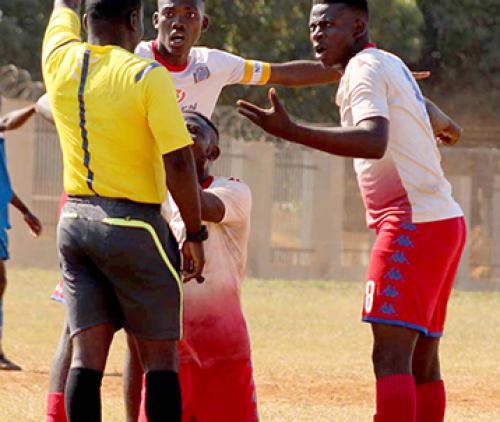 The players of Musina United confront the referee, Mr Eric Munyai, accusing him of denying them what they described as a legitimate goal. Photo: Frank Mavhungu.

Musina United beat Madridtas FC 8-7 in their SAFA Vhembe promotional playoff group-stage match to secure a place in the semi-final at the Tshifulanani Stadium on Saturday.

As if they were going to bury United alive, Madridtas took the game to their opponents from the first whistle. They took only two minutes to stamp their authority. Mulisa Ramusia, who scored a brace in the game, found the net with a close-range ground cutter after receiving a beautiful pass from Phumudzo Kwinda.

The goal seemed to be a wake-up call to Musina United. They regrouped from behind, initiating some promising moves from the middle of the park in their search for the equalizer. Their efforts paid dividends in the 29th minute when Sammy Ndou blasted in a rocket from the edge of the box.

Madridtas lost cohesion in the midfield after Musina’s equalizing goal. United capitalized on the setback to score the second. Their centre forward, Thomani Motsoko, unleashed a powerful half volley from the 20-metre area. Madridtas’ keeper, Thembuluwo Mbedzi, watched helplessly as the ball went beyond his reach. United enjoyed their 2-1 lead until the end of the first half.

Madridtas approached the last half with more self-confidence. They levelled the score nine minutes into the last stanza. Mulisa Ramusia completed his brace with a ground cutter.

The score was 2-2 when the referee blew the final whistle, and the winner was determined through a penalty shootout. United converted six through Andiwe Ramatsoko, Thomani Motsoko, Tsepo Mudau, Tshimangadzo Singo, Mulisa Munyembane and Whisper Nemakubye, while Madridtas managed to score only five from the white spot.