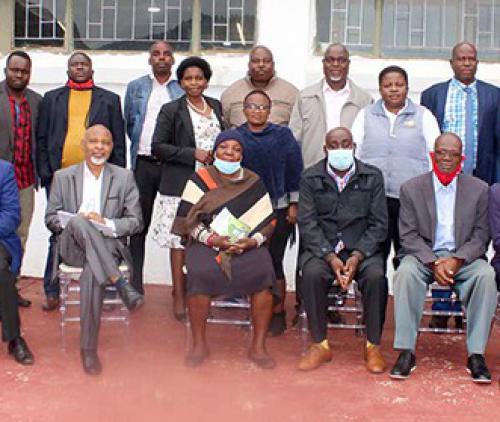 The president of the association, Mr George Kubayi (seated right) and the marketing manager of MMK Administrators, Mr Fhatuwani Magogodela (seated left), and the other regional committee members pose for a photo after the meeting.

The SAFA Vhembe Regional Football Association has another reason to rejoice. The association had managed to maintain a clean audit during the financial year that ended on 30 June last year. This came to light during the association’s annual congress held at the Munakisi Conference Hall in Muledane last Saturday.

During the meeting, the association revealed that it had managed to achieve great things during the soccer season under review, under difficult circumstances. When presenting the annual report, the regional secretary, Mr Eric Muneri, stated that the association had managed to produce the regional champion, Madridtas FC, despite the fact that they could not complete their league activities because of the national lockdown.

Madridtas FC represented the region in the SAB League provincial play-off tournament that was staged at the Thabazimbi Stadium in the Waterberg District. Madridtas did not make the grade in the tournament after winning their first two matches convincingly. The Vhembe Regional Association ambassadors lost their last two matches and finished the two-day event in the fourth spot on the log standings.

Mr Muneri further revealed that death had robbed the association of three of their best match officials, Devillas Nembidzane, Steward Motekgane and Sengani Ravhuhali, during the soccer season under review.

What also came to light during the meeting was that the league’s disciplinary committee had dealt with a total of 31 cases of misconduct, ranging from assault of referees to abandonment of games.

During the meeting, the president of the association, Mr George Kubayi, stated that the fact that a team from their region, Mikhado FC, had taken part in the ABC Motsepe League promotional playoffs twice in a row and failed to make the grade on both occasions, was something that did not go down well with them.