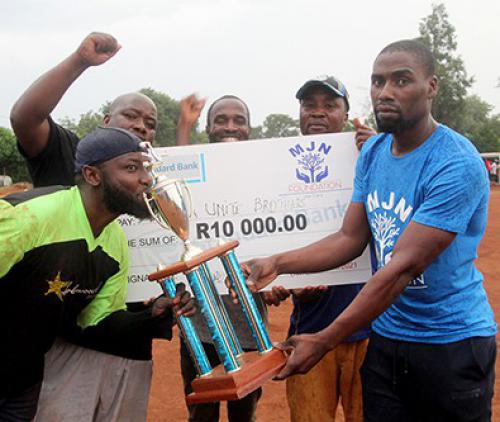 Maelula United Brothers were crowned as champions of the MJN Foundation Top 16 Soccer tournament when they beat Black Poison 2-0 in the final match at Madombidzha on Sunday.

During the prize-giving ceremony, Mr Carlson Nemaridili of Gwala Security said that the company would continue to sponsor the rural soccer tournament next season. He also stated that the sponsorship amount would increase.

According to Nemaridili, he believes in serving the community and that was why the company had decided to sponsor the event. “We are part of this community and we are doing this to support local people,” he added.

He praised the committee that managed the sport well and encouraged community members to keep on producing talent among the youth. Nemaridili stated that sponsorships played a vital role in sports development. He described football as a community-building sport that played a major role as far as job creation was concerned.

The secretary of the MJN Foundation, Mr Thendo Mavhandu, appealed to businesspeople to get involved in promoting local activities. He emphasized the importance of education and said that sports people must not neglect their studies. “You can be a star today and be written off the following day. Education will never forsake you, and you can bank on it,” he added. He praised all the sponsors who contributed to the tournament.

The champions in the Top 8 champions were Madombidzha Try Again. They received R5 000 and gold medals. The runners-up, Manavhela Black Aces, collected R3000 and silver medals.