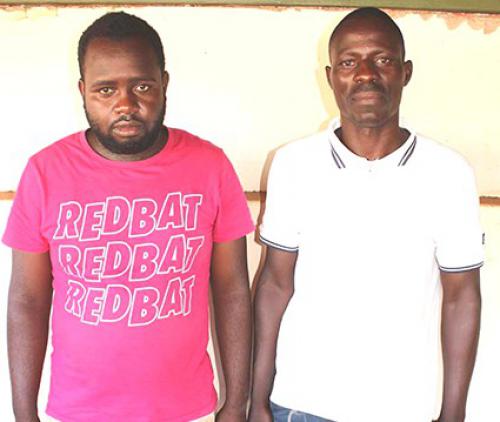 The organisers of the tournament, Mr Godfrey Mandiwana (left) and Mashudu Mabeka.

Eight teams to vie for prizes in Lubumbashi challenge

The Phaphama grounds at Hamakuya village will be a beehive of activity this weekend. That is where the Lubumbashi Top 8 Soccer Challenge will be staged.

According to one of the organisers of the tournament, Mr Mashudu Mabeka, eight teams from Makuya and the surrounding areas will take part in the event. Teams that will partake in the tournament are Berea FC, Anel Real Vikings, Covid-19 FC, Lukau FC, Musasenda Big Five, Dipeni FC, Thengwe Flying Peace and Phaphama All Stars.

The draw for the quarterfinal matches was conducted on Monday morning. The quarter-final matches will be played on Saturday while the semi-final and final will be seen on Sunday.

The fixtures for the quarter-final matches are:  Thengwe Flying Peace vs Lukau FC, Phaphama All Stars vs Musasenda Big Five, Anel real Vikings vs Dipeni FC and Berea FC vs Covid-19 FC.

According to Mr Mabeka, the draw for the semi-final matches will be conducted at the grounds shortly after the last quarterfinal game. Mr Mabeka revealed that the champions of the tournament will be presented with a cash prize amounting to R7 000. The runners-up will walk away with a cash prize of R4 000. Teams booted out of the tournament in the semi-final stage will each receive R1 500 and a soccer ball.

Thabelo Funeral Embassy and Mrs Marry Mudzanani are the main sponsors of the tournament. For more information, Mr Mabeka can be phoned on 0714587157.