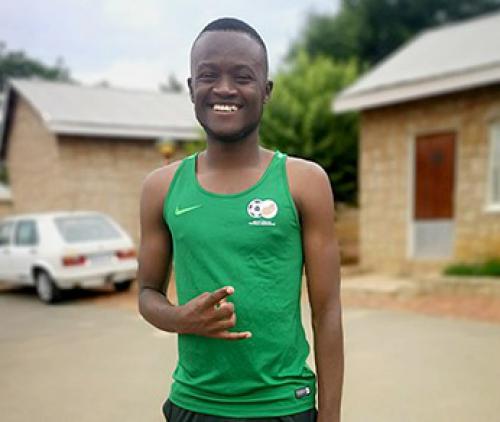 Sydney “Pogba” Malivha has been called up to play for the national U/20 soccer team. Photo supplied.

Hard work and dedication have finally paid off for local talent Sydney “Pogba” Malivha of the Matanda Rockers FC. The 17-year-old midfielder from Luvhalani village in the Nzhelele area was selected to play for the South African National U/20 team, Amajita.

Malivha has played for Matanda Rockers since 2017, when he was only 14 years old. During an interview last week, he said that he wanted to make a good impression, with the hope of becoming a regular player for Amajita.

When asked about his dreams as a football player, Sydney said that he would love to play for Bafana Bafana one day. He described his call-up to the national U/20 team as a step in the right direction. He is happy and excited about being in the national team for the first time and is ready to start preparations with the team for the Cosafa Cup.

Sydney said that he fell in love with football at a young age. “I used to play with older boys at an early age and the sport that they loved was soccer.”

He said he had not expected the callup. “I’m really grateful because this is something every player wants. I’m happy and excited. I’m determined to go there and learn everything. The first person I told was my team manager, Elewani Siavhe, because he always encouraged me to keep doing well and to keep fit. So, I have to take this opportunity and use it. We (Rockers) played many tournaments, and we relax too, but I train even if it is by myself. I follow a schedule of the things I need to do every day,” he said.

Sydney said that he had been following a plan inspired by Ajax Cape Town defender Thendo Mukumela, who also plays for the national U/23 soccer team. “I would like to urge all young boys and older ones to participate in different sporting codes. Participation in sport makes a person live a healthy life and socialize with other people, rather than drinking alcohol and smoking,” Sydney said.

Elewani “Killer” Siavhe, manager of the Matanda Rockers, said that Sydney’s achievement was an honour to the team, his family, SAFA Vhembe and the community as a whole.