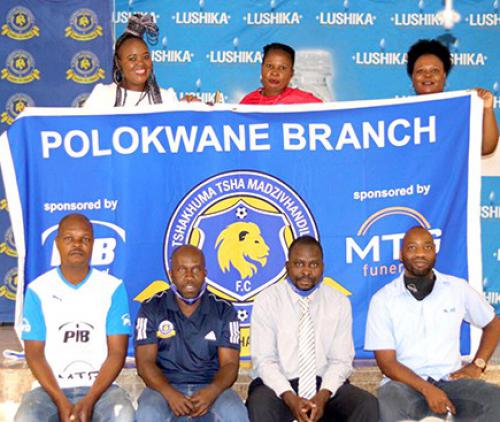 Mr Livhuwani Madzuhe (second from left) and Mr Livhuwani Magwabeni (right) from MTG Funerals (right) pose for a photo with the representatives from the Polokwane branch.

Tshakhuma Tsha Madzivhandila FC (TTM) have reason to believe that they will be one of the biggest clubs in the country in terms of support and performance. The club launched 15 supporters’ branches during a ceremony held at the 2 Ten Hotel in Sibasa last Saturday. The branches that were launched are: Ngovhela, Tshakhuma, Tshaulu, Malamulele, Sibasa, Vuwani, Nzhelele, Makhado, Thohoyandou, Thengwe, Vleifontein, Western, Polokwane, Vhufuli and Shayandima.

According to the club’s communications and marketing manager, Mr Livhuwani Madzuhe, his aim is to launch 100 branches in the Limpopo Province alone within the next three months. Mr Madzuhe revealed that he will be launching 15 more branches in Gauteng next month. He also stated that they had already launched one branch in Mpumalanga last month.

Mr Madzuhe further stated that he would return home after his Gauteng trip to accomplish his mission to launch more branches in Limpopo. According to him, the launching of the supporters’ branches follows the election of the provincial executive committee members last month. Mr Madzuhe again stated that the club had held another ceremony at the club’s offices in Thohoyandou the following day.

According to him, TTM adopted one of the local clubs affiliated to the Sasol Women’s League, Chippas United Ladies FC, during Sunday’s ceremony. He went on to state that the adoption of the club meant that Chippas would be known as Tshakhuma Tsha Madzivhandila Ladies FC in future. The marriage between the two clubs means that Chippas will automatically qualify to campaign in the Sasol National Women’s League when the activities for the new season start early next year.

Mr Madzuhe said that, as an adopted child, Chippas Ladies would be provided with office space next to TTM’s offices in Thohoyandou and that Mr Robson Magoro would continue to manage the team until further notice.

During an interview with Mr Magoro after the ceremony, he stated that they had already started with their preparations for the new season. He revealed that his team had beaten Malemang Ladies FC 2-0 in their rehearsal match at the Malemang grounds in Lebowakgomo last Saturday.