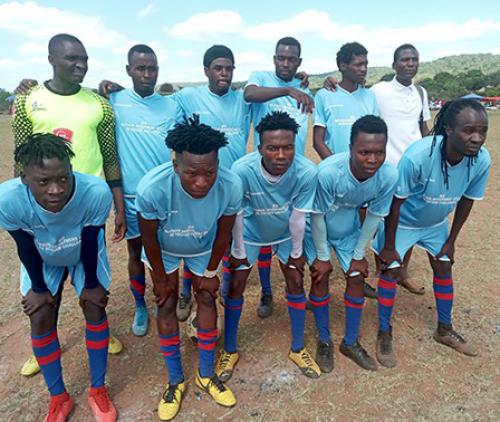 One of the hot favourites, Lukau FC.

Tensions builds up in Mafanya cup

The struggle in the Mafanya Soccer Tournament is getting more intense. Several matches were played at the Tshanzhe ground over the past weekend. Spectators were in for numerous surprises as most of the so-called big guns were booted out of the tournament in the opening stage.

Tshipako Hotspurs are still battling to come to terms with the 7-8 defeat they suffered at the hands of Khakhu Fast XI.

The draw for the quarterfinal matches was conducted at the grounds last Sunday, shortly after the final game. The match that is expected to be a crowd puller will be between Berea FC and Musasenda Big Five. The other match where the result is likely to be decided on penalty shootout will be between Anel Real Vikings and Tshikundamalema Waterfall.

Mulodi Freedom Birds are bracing themselves for a tough match. They will battle it out against Folovhodwe Stone Breakers. Khakhu Fast XI will have a date with Tswera Hot Chilies. The game that is expected to keep the spectators at the edge of their seats from the onset to the end will be between Tshilavulu Elite and Bashasha Terror Masters.

According to one of the organisers of the tournament, Mr Dakalo Ratshitanga, the champions will become R10 000 richer. The runners-up will take home a cash prize of R5 000, while the team that will finish in the third place will be presented with a cash prize of R3 500. An amount of R2 500 is awaiting the team that will obtain the fourth position in the tournament. Mr Ratshitanga further stated that the final would be staged on a date still to be announced.