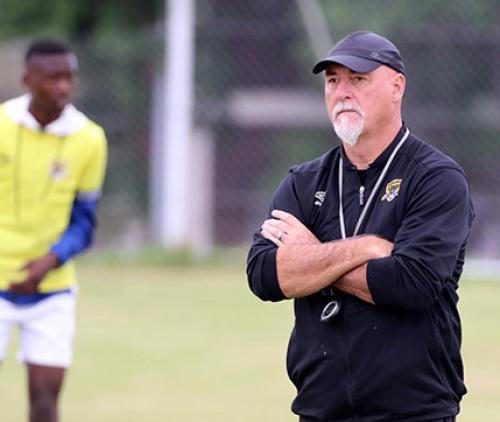 Black Leopards started the new season on a bad note. They lost 0-2 to Supersport United last Saturday evening. As if that was not enough to irritate the team’s fans, Lidoda duvha suffered a 1-3 defeat in their Limpopo derby against Baroka FC at the Thohoyandou Stadium on Tuesday evening.

The team’s assistant coach, Mr Morgan Shivambu, was in charge of the team in their game against Supersport as the head coach, Mr Patrick Aussems, was still sorting out issues relating his work permit.

The Belgian mentor was giving instructions from the team’s technical bench in their game against Baroka FC on Tuesday night. This after the 55-year-old former Simba FC head coach, obtained his papers on Monday. Speaking to Limpopo Mirror after the team’s embarrassing loss to Baroka, Mr Aussems said that the defeat was a wakeup call to the technical staff.

Baroka’s goals came in the first half via Richard Mbulu (2) and Evidence Makgopa. Mbulu scored within the first minute of the game with a header. Baroka conceded an own goal in the 60th minute after Michael Shozi tapped the ball into his own net in an attempt to clear.

Aussems said that they were going back to the drawing board and had started with their preparations for their next fixture. Lidoda duvha’s next fixture will be against Amazulu, with whom they will wrestle for league points at the King Zwelithini Stadium next Wednesday, 4 November.

Unfortunately for Leopards, their central defender, Tebogo Makobela, will not be available for the game. Makobela was given his marching orders in their game against Baroka FC on Tuesday evening.

Mr Aussems further revealed that he had told his players to put the team’s two successive defeats behind them and to focus on their next match. The Thohoyandou outfit are languishing at the bottom of the log, following the two defeats.