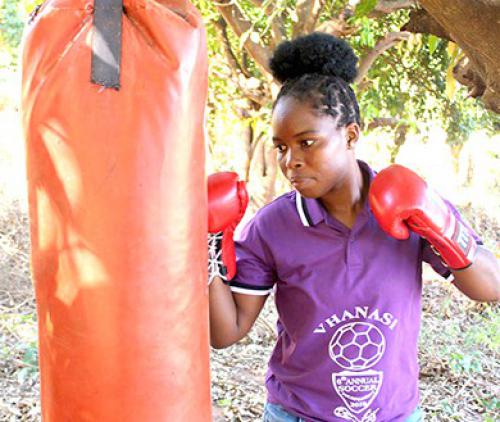 The Muleba family from Tshidzini village in the Tshamutshedzi area is living a miserable life because of the nationwide lockdown. The family’s breadwinner, Raider Muleba, has lost her income because of the outbreak of the Covid-19 pandemic.

Raider Muleba is a female professional boxer. The 28-year-old Muleba’s only source of income is through exchanging blows inside the boxing ring.

Unfortunately for Muleba, she did not have a single fight this year.  She revealed that her fight against Matsidiso Mokibisi, which was scheduled for 1 March this year, was cancelled at the eleventh hour. This after she fell ill the night before the fight. Muleba said that the last time she had been in the boxing ring had been when she had met Kholosa Ndabayini in East London in October last year.

She further revealed that her family of six was relying on her father’s old-age grant, following the Covid-19 regulations that prohibit all contact sports, including boxing. Muleba stays with her parents, two sisters and her eight-year-old daughter.

She sadly said that when she had turned professional about eight years ago, she had thought it had been the starting point for her to live an independent life.

Born at Tshidzini village on 3 February 1993, Muleba said that life had changed for the better ever since she turned professional and that everyone in the family was always happy. According to her, she used all her savings towards the refurbishment of her family’s dilapidated house with the hope that she would get more fights this year and raise funds to purchase roofing material.

She stated that things had turned inside out after the state president had announced the nationwide lockdown towards the end of March. Muleba’s debut professional fight was against Mukondeleli Ndou, whom she convincingly beat on points. She stated that she would never forget her fight against Unathi Muyekeleni, with whom she exchanged blows at the Mdantsane Hall in the Eastern Cape three years ago. According to her, Muyekeleni was declared the winner although she was knocked down and counted against on three occasions in the fight. She stated that she could have hung up her gloves after that fight, had it not been for her father who had persuaded her not to do so.

The Muleba family is a boxing family. Her father, Mr Madala Wilson Muleba, was a highly respected traditional boxing (musangwe) champion during his heydays, while her mother is a big boxing fan. Her younger sister, Rollen Muleba, is also a professional boxer.